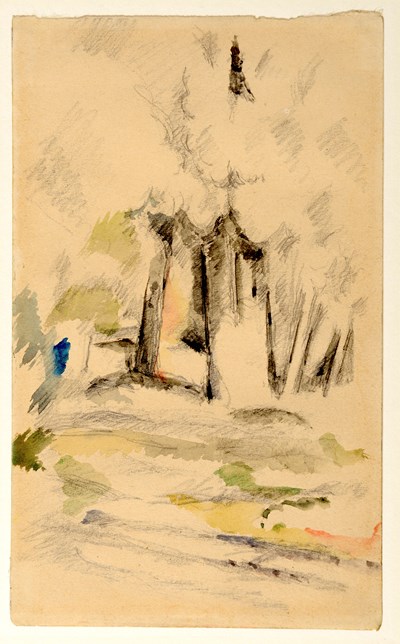 
Nearly all of Cézanne’s pencil drawings and smaller watercolours, such as the present sheet, were once part of sketchbooks that he used over long periods of time. Cézanne’s sketchbooks were filled with portrait studies of his family and friends, views of his studio, landscape and figure studies, copies after antique or Old Master paintings and sculptures, and still life subjects. As one scholar has noted, ‘Cézanne’s sketchbooks are among the most evocative and touching works of their kind to come down to us. They are full of copy notes, compositional studies, casual observations of objects or figures, as well as lists and notations on all sorts of matters.’ Furthermore, as Christopher Lloyd has pointed out, ‘Cézanne used his sketchbooks randomly and even within each one there is a disregard for the sequence of the pages. It is as though he constantly picked up the nearest one to hand, regardless of previous usage...Although Cézanne did make many drawings on single sheets of larger dimensions, especailly watercolours dating from the 1890s, the pages in the sketchbooks reveal the essence of Cézanne’s draughtsmanship. They show him to have been an intensely private man, but at the same time someone deeply committed to perfecting the process of making art in order to record the world as he saw it with the greatest versimilitude and probity.’ A characteristic of the watercolours of Cézanne is the striking balance the artist was able to achieve between the pencil drawing itself, the delicate touches of watercolour laid over this, and the areas of the paper left in reserve, untouched by pencil or paintbrush. The German poet Rainier Maria Rilke described Cezanne’s watercolours in a letter to the artist Paula Modersohn-Becker, just after having seen an exhibition of them in 1907, as ‘very beautiful. Just as confident as the paintings, and as light as the paintings are heavy. Landscapes, very light pencil outlines and here and there, as if just for emphasis and confirmation, there is an accidental scattering of color, a row of spots, wonderfully arranged and with a security of touch: as if mirroring a melody.’Studies of trees form one of the largest subgroups of Cézanne’s landscape watercolours. The subject allowed the artist to divide the scene into lines and dabs of colour, with the white areas where the paper was left in reserve used for the sunlight filtered through the canopy of trees, branches and leaves, depicted with thin washes of watercolour. As Götz Adriani has written of such works, ‘watercolors proved to be almost ideal for recording the most fleeting natural phenomena on the spot. As he gained assurance in the niceties of watercolor technique, Cézanne was able to register his ideas instantly. Isolated treetops, blossoming tendrils, or simple patterns formed of branches and leaves that would scarcely have been of sufficient interest for long and tedious work on canvas reveal, when depicted in watercolor, a remarkably lyrical aspect of the painter. The most trivial things are presented with great care, and ephemeral impressions not normally associated with him – the barely perceptible motion of small branches in the wind, or the diaphanous reflection of clusters of trees in the water – are captured and given permanence.’ Although dated by John Rewald to c.1882-1884 in his catalogue of Cézanne’s watercolours, the present sheet was dated by Lionello Venturi to c.1895-1900 in his notes for the unpublished, revised edition of his 1936 catalogue raisonné.

Literature:
John Rewald, Paul Cézanne. The Watercolours: A Catalogue Raisonné, London and New York, 1983, p.126, no.168, illustrated fig.168; To be included in the forthcoming online Catalogue raisonné of Paul Cézanne’s Watercolors, under the direction of Walter Feilchenfeldt, David Nash and Jayne Warman.