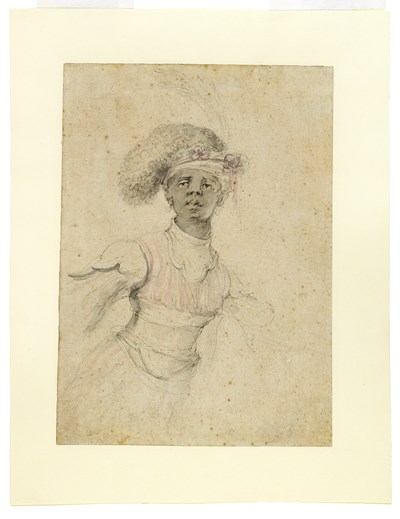 Study of a Moor with Arms Outstretched Sold


Drawings such as this were probably intended as costume designs for the various pageants, masquerades and ballets of the Medici court, and especially the performances of the Accademia degli Immobili. Founded in 1648 under the patronage of Cardinal Gian Carlo de’ Medici, the Accademia was made up of prominent Florentine citizens and noblemen who staged one or two musical plays each year. In the late 1650’s and early 1660’s Della Bella was often called upon to supply costume designs for these productions. It is interesting to note that, in each of the productions of the Accademia, a part was written for the Moorish servant of Cardinal de’ Medici. Indeed, among a large group of full-length costume studies by della Bella in the British Museum - from the same period and in the same technique as the drawing here exhibited - is a study of a costumed moor, quite possibly the same model. A pendant drawing to the present sheet - a study of the same costumed moor, facing to the left - shared the same provenance until 1995. Five similar bust-length studies of female moors wearing elaborate headdresses, also drawn with pale washes of colour, are in the Royal collection at Windsor Castle. Other examples, drawn in pen and ink, are in the Instituto Nazionale per la Grafica in Rome.

Literature:
Anthony Blunt, The Drawings of G.B. Castiglione & Stefano della Bella in the Collection of Her Majesty the Queen at Windsor Castle, London, 1954, p.95, under no.31.

Study of a Moor with Arms Outstretched