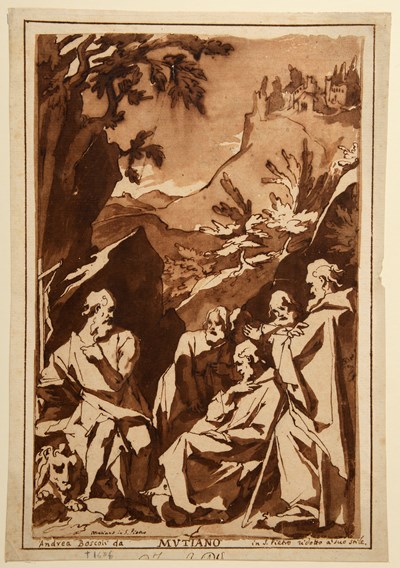 Pen and brown ink and brown wash, laid down on a 17th century (Resta) mount. A very faint study or offset of a composition with the Virgin(?) with figures and putti in black chalk on the on the reverse of the mount. Inscribed Muziano in S. Pietro at the lower left. Inscribed (by Resta) Andrea Boscoli da MUTIANO in S. Pietro ridotto à suo stile. in the lower margin. Part of an inscription cut off at the bottom of the mount. Further inscribed S. Maria degli Angeli a Roma on the reverse of the old mount.267 x 175 mm. (10 1/2 x 6 7/8 in.) [sheet]292 x 203 mm. (11 1/2 x 8 in.) [including mount]


This drawing is a late work, and may be dated to Andrea Boscoli’s final stay in Rome, between 1606 and 1608. It is a copy after an altarpiece by Girolamo Muziano (1532-1592), intended for the Gregorian Chapel in St. Peter’s in Rome. Commissioned from Muziano by Pope Gregory XIII in 1582, the large canvas of six hermit saints was left unfinished at the artist’s death ten years later, and was eventually completed by his pupil Cesare Nebbia (c.1536-1614). In the 18th century, the painting was transferred to the Roman church of Santa Maria degli Angeli, where it remains today.This is a fine and typical example of Andrea Boscoli’s draughtsmanship near the end of his career. As Julian Brooks has noted, ‘A distinctive style is apparent in Boscoli’s late copies...Typically they are of a relatively small scale, and are drawn in a broad dark brown wash over a few ink lines, sometimes over red chalk underdrawing; they reduce the composition to a pattern of light and shade, and introduce a dramatic chiaroscuro where there was often none before.’ Another, somewhat weaker version of this composition by Boscoli, which appears to have been reworked by another hand, is in the Uffizi in Florence.The inscription on the old mount of the present sheet is in the distinctive hand of the Oratorian priest Padre Sebastiano Resta (1635-1714). One of the leading collectors of drawings in Italy in the 17th century, Resta assembled a large and significant group of some 3,500 sheets, gathered into about thirty albums.

Sacra Conversazione with Saints Jerome, Romuald(?) and other Hermit Saints, after Girolamo Muziano