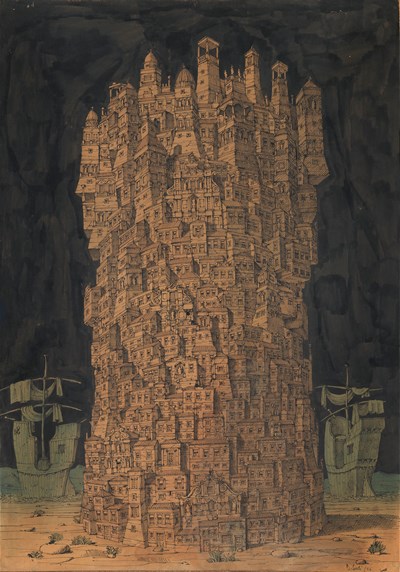 
Drawn in 1956, this among the largest works on paper by Domenico Gnoli, and dates to the period when he had chosen to abandon working for the theatre, claiming that ‘it was distracting [him] from the essential’, in order to devote himself to drawing. A close stylistic comparison may be made with a much smaller ink drawing of an Imaginary City of 1956, sold at auction in 2006. Also comparable in technique and conception is an equally large pen and ink drawing, also of the same year as the present sheet, entitled The Ship of Emigrants (La nave degli emigranti), which was formerly in the collection of Frédéric Dard in Geneva, as well as a drawing entitled City of 1957, depicting an imaginary city resting on top of a table, which was in a private collection in Bath in 1985. A Times review of an exhibition of drawings by Gnoli at the Arthur Jeffress Gallery in London in 1957, in which the present sheet may have been included, noted that ‘Mr. Gnoli’s drawings are complex, fantasticated, and full of busy goings-on of a mildly satirical absurdity – the general effect seems compounded of Babel and the Ship of Pools [sic]. Some of the most delightful are those in which he builds intricately crazy cities that tower up like insecure antheaps and bristle with activity...The success of imaginative excursions of this sort depends largely on the ability of the never-never land that has been created to sustain a measure of internal plausibility by which even the most extravagant oddities become, in context, the correct and acceptable thing. The world of Mr. Gnoli’s drawings may seem a largely synthetic and artificial one, but it does establish a sense of its own private logic by its exorbitant amount of quite rational detail. The impossible boats are all firmly built: one can count the nails. And though the tenement-blocks only stand up by the grace of architectural fiction, the construction of the innumerable doors, windows, stairways, and balconies of which they are composed appears eminently sound and reasonable.’ Another anonymous review of the same exhibition expressed the opinion that ‘Dominic Gnoli is an anachronism in draughtsmanship, a modern in paint. His drawings, more meticulous than Osbert Lancaster, more fantastic than Phiz, are full of ships and towers. The myriad Lillyputian figures of bullfighters, trippers, mariners and indeterminate crowds attendant have a sophisticated whimsy which would fit a period pantomime. Gnoli’s little people are cleverly stuffed stage props.’ A third reviewer simply chose to describe the artist as ‘addicted to towering and preposterious erections, whether pseudo-buildings or toppling nautical superstructures.’The fantastic imagery, boundless wit and sheer technical virtuosity of Gnoli’s work continued to appeal to critics and collectors long after his untimely death. As Francesco Bonami has recently written, ‘Gnoli journeys across the cosmos and visits imaginary societies. He invented his own planet and traveled there like Antoine de Saint-Exupéry’s Little Prince. As an artist, Gnoli was truly an aristocrat, ruling his imagination like a kingdom. He observed his planet from both ends of the telescope: From one end he was able to see a faraway world, with many little characters on many different stages; from the other end, as if looking into a microscope, he was able to get very close, like a flea.’