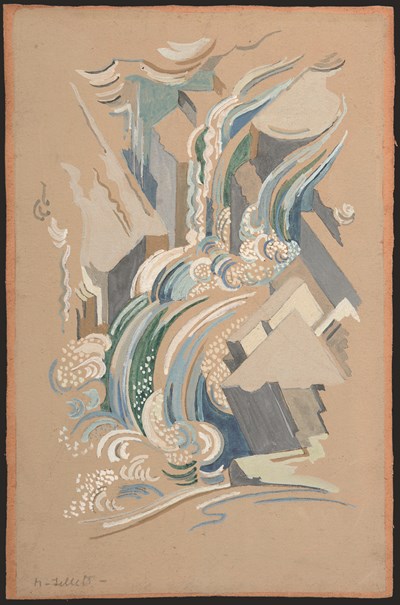 
This gouache drawing can likely be dated to the second half of the 1930s, and may be grouped with a number of works of this period which study the effects of flowing water. In 1935 Mainie Jellett visited an exhibition of Chinese art at the Royal Academy in London, and came away greatly inspired by the Chinese tradition of landscape painting: ‘It was a way of portraying the landscape in a semi-abstract manner...Chinese art contained elements of interest to her, especially the emphasis on pattern and rhythm developed from the forms of nature.’ As the artist herself later recalled of the Chinese Art exhibition, ‘This made a profound impression upon me and helped to form an approach to landscape painting, which I have used in varied forms ever since.’ Comparable gouache drawings on paper by Jellett include a Waterfall and two studies of Waves, all in private collections.