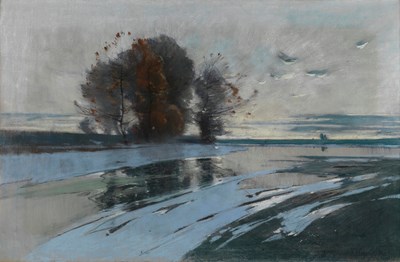 A Winter Sky Reflected in a Lake Sold


In the early years of the 20th century, Karl Hagemeister worked extensively in pastel, applying the medium on canvas or linen, and creating landscapes on a very large scale. As he later recalled, ‘At this time, I had the basic idea to depict nature in its actual form and colour. However, since according to the notions of the day the ultimate goal of landscape painting was to depict a moving sentiment, that is when I began to paint solely in pastel for many years, since this was the best way to depict movement in air and light.’ The artist further described the pastel delicacy that he was trying to achieve in his landscapes of this period in a letter; ‘I have come to realize that part of the breath of life is movement, and that this can only be achieved by the finest variations in the application of paint. If you paint everything in impasto, then you will not achieve movement, but instead, when you shade from impasto to the utmost delicacy, you can depict clear, distinct distance as well as vagueness in a landscape.’A slightly smaller variant of the present composition, executed in coloured chalks on canvas, appeared at auction in Germany in 2011. Among other, stylistically comparable large-scale landscapes in pastel on canvas by Hagemeister are several examples in the collection of the Bröhan-Museum in Berlin, all of which may be dated to the beginning of the 20th century. The subject of the present pastel is particularly close to that of an oil painting of a Winter Thaw of c.1904, also in the Bröhan-Museum.

Provenance:
Acquired by the grandfather of the previous owner.

A Winter Sky Reflected in a Lake