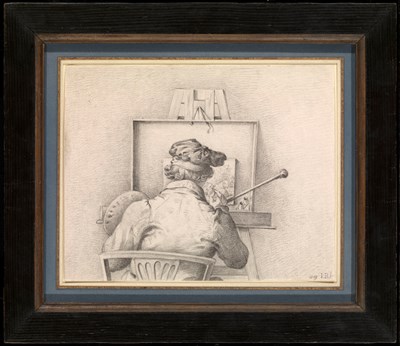 A Painter at an Easel (Self-Portrait?) Sold


This drawing may have been intended as a form of self-portrait, although the view of the sitter from the back makes any attempt at a firm identification impossible. (The artist depicted here seems to be working on a small painting of a pastoral scene with animals; a subject typical of Bernard’s painted oeuvre.) A signed, undated self-portrait drawing by Bernard, in which he appears middle-aged, is in the Rijksmuseum in Amsterdam. Two other self-portrait drawings by the artist are known, both in the Rijksprentenkabinet in Leiden.Jean Bernard seems to have had a penchant for depicting fellow artists at work, and among stylistically comparable drawings in black chalk by him is a portrait of the painter and museum curator Gerrit Jan Michaëlis (1775-1857) seated at his easel, dated 1823, in the Rijksmuseum. Other drawings of artists by Bernard include a signed and dated watercolour of 1812 of the painter Jan Kobell (1778-1814), seen in his studio and seated at an easel, which appeared at auction in Amsterdam in 1912, and a drawing in red chalk, dated 1809, of the painter Wouter Johannes van Troostwijk (1782-1810), in which the subject is, like the present sheet, shown from behind and working at an easel.

Literature:
H. van Hall, Portretten van Nederlandse beeldende kunstenaars: Portraits of Dutch painters and other artists of the Low Countries. Specimen of an Iconography, Amsterdam, 1963, p.21, Bernard no.2 (as a self-portrait).

A Painter at an Easel (Self-Portrait?)