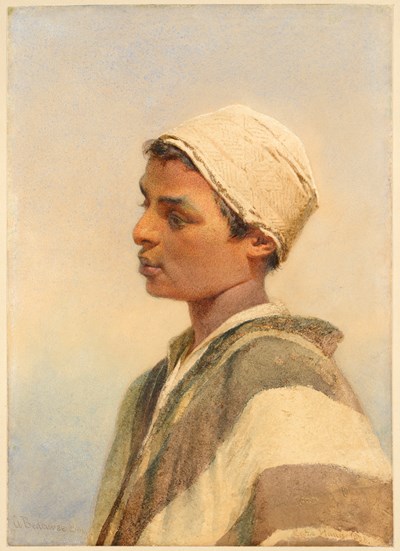 Mohammed, A Bedouin Boy of the Sinai Sold

Watercolour, over an underdrawing in pencil. Signed and dated Carl Haag 1858. at the lower right. Inscribed A Bedawee Boy at the lower left. Further inscribed and dated Mohammed di Sinai / Dez: the 2nd 1858 and numbered 16 on the verso. Inscribed Mohamad / A Bedawee Boy of the Tarvarah Tribe, Sinai / painted by Carl Haag / Cairo 1858 on a label formerly attached to the old backing board.347 x 246 mm. (13 5/8 x 9 3/4 in.)


On the occasion of a retrospective exhibition of Haag’s watercolours in 1885, in which this drawing was included, one writer noted that the artist ‘for some years wandered through Italy, Greece, Egypt, Syria, and Palestine, finding a resting-place for months with those children of the desert, the Arabs, whose history, and their strange, wild life, powerfully affected a poetic chord in the artist’s nature; and this greatly influenced his future art...A traveller in many lands, and with mind receptive of beauty in whatever form it might be found, still it was not until the artist had sheltered beneath the Pyramids...and had made his home in tents with wandering Bedouin, that he found his art instinct satisfied and at rest. Here was a country venerable with the dust of countless ages, a people but little changed in manners, customs, or even costume, since they were sent out as wanderers by the Creator. In a land so picturesque, and a people whose history was full of poetry, subjects for the artist’s pencil for the future were assured, and from those subjects he has, indeed, rarely wandered.’ Drawn on the 2nd of December 1858, this sensitive watercolour portrait is typical of Haag’s sympathetic treatment of the people he encountered on his travels in Egypt. Among comparable watercolours is a Portrait of Ali Ben Nasir Mansur, Son of the Bedaween Sheikh of Sinai, dated 1858, and An Arab Shepherd Boy in the Desert near Cairo, dated the following year, as well as Moosa, a Bedawee, of the Howaren Tribe, drawn in 1873; all three works were until 1982 in the possession of the artist’s descendants. Also stylistically comparable is a watercolour portrait of ‘Fatime of Aboukir’, an Egyptian Fellaheen Girl, dated 1858, which appeared at auction in 2000.In 1885 the Goupil Galleries in London held a loan exhibition of Haag’s watercolours, with works lent by Queen Victoria and the Prince of Wales, among others. The present sheet was included in that exhibition, lent by Sir Prescott Gardner Hewett (1812-1891), a surgeon at St. George’s Hospital and an amateur watercolourist, who in the 1840’s had saved Haag’s right hand after it was severely injured by the explosion of a powder flask, burning the tendons. Much of Hewett’s collection of watercolours was left to the nation, and is now in the Victoria and Albert Museum in London.

Mohammed, A Bedouin Boy of the Sinai