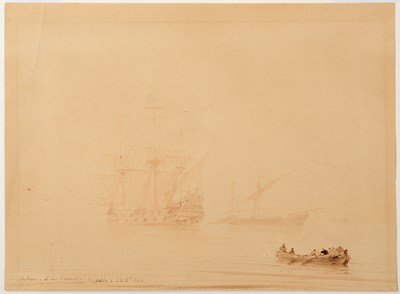 
Dated the 22nd of October, 1841, this atmospheric drawing bears the artist’s dedication to Louise Montefiore (1821-1910), who had married Sir Anthony Nathan de Rothschild, later 1st Baronet de Rothschild (1810-1876), the previous year. A similar composition is found in a closely comparable drawing by Gudin of A Burning Ship on a Calm Sea, dated 1846, in the Fodor Collection at the Amsterdams Historisch Museum in Amsterdam.

A Party Rowing Ashore from a Warship on a Misty Morning