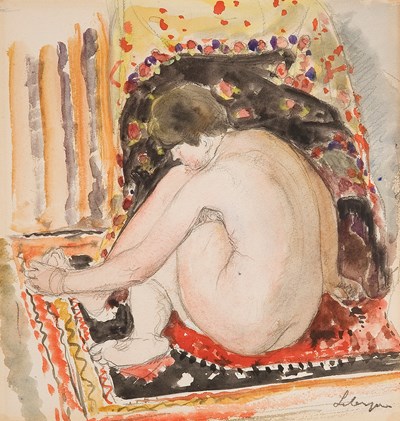 A Seated Female Nude in an Interior Sold


This fine watercolour may be related to a series of paintings by Henri Lebasque of female nudes in an interior, painted in 1925 and 1926 at Le Cannet, not long after the artist settled in the South of France. At this time in his life, Lebasque began employing models, since his two daughters had married and his wife was no longer willing to pose nude for the artist. Little is known of the models who appear in these late paintings, apart from their names; one was named Kiki and another – who was blonde, and whose services were briefly shared with Pierre Bonnard – was known as Marinette. As has been noted of these paintings, ‘The models of Le Cannet are painted with a natural ease and suggestive sensuousness concentrating on the idea of woman as muse – a figure of abstract and majestic fecundity...Lebasque painted his young models in poses of penetrating intimacy and subtle clarity...[his] nudes are subtle, relaxed and pensive, and rendered with a sure sense of contour in the figures.’ The present sheet, which depicts the model Kiki, is particularly close to two paintings of 1926; a 'Nu a la chemise rose' in the Fondation Pierre Giannada in Martigny and a 'Nu au canapé rose' in a private collection in Chicago. In these paintings, as in the present sheet, Lebasque has placed his nude models against colourful and elaborately patterned rugs and cushions in the sunny interior of his home at Le Cannet.

A Seated Female Nude in an Interior