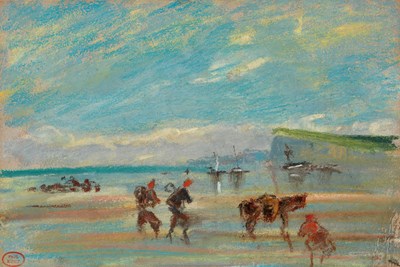 
Much of Paul Huet’s work remained with his family after his death in 1869, with only a part of his studio inventory dispersed at auction in Paris in 1878. This vibrant beach scene, which may be dated to around 1847, was among those works retained by the artist’s descendants until it was sold at auction in 1962.By comparison with his numerous watercolours, as well as his drawings in pen or pencil, landscapes in pastel are very rare in Paul Huet’s oeuvre. His work in this medium can generally be dated only to the decade of the 1840’s. Two similar, small pastel landscapes by Huet – views of Bagatelle and Saint-Cloud - are in the Louvre, while other pastel drawings are in private collections.