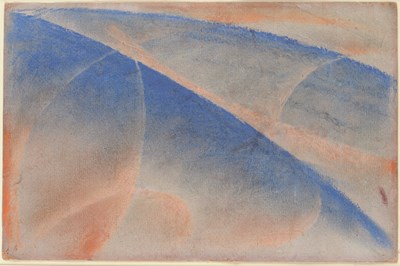 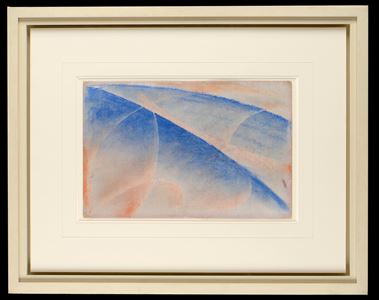 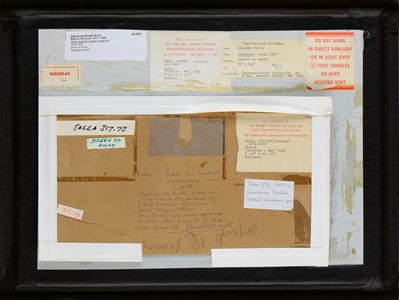 
This pastel drawing may be counted among Giacomo Balla’s abstract studies of velocity that occupied him from 1913 onwards; a period of intense creativity for the artist. The use of pastel was a characteristic of Balla’s drawings throughout this fertile period and, as Piero Pacini has noted, ‘Balla’s singular use of pastels [was] enriched by an array of dazzling, hazy, flashing light effects.’ This drawing may in particular be compared, on technical, stylistic and compositional grounds, with such works by Balla as a small pastel (present location unknown) and a study in coloured chalks entitled Speeding Automobile of 1913, in the Estorick Collection of Modern Italian Art in London. As Anne Coffin Hanson has noted of the present work, ‘The descriptive French title is unusual and may have been invented by Madame Marinetti, to whom Balla presented the work. On the other hand, it may indicate Balla’s enduring commitment to naturalistic observation as a basis for his studies of light and speed.’The first owner of Sunset with Goldfish (Soleil couchant au poisson rouge-mer) was Benedetta Cappa Marinetti (1897-1977), known professionally as ‘Benedetta’. An artist and writer, Benedetta studied with Giacomo Balla in Rome, and became a part of the Futurist group. In 1923 she married Filippo Tomasso Marinetti, founder of the Futurist movement. According to her inscription on the backing board, Benedetta Cappa was given this pastel by Giacomo Balla in 1914, while she was still a student, when she was in the artist’s studio in the company of her fellow Futurist painter, the Czech artist Ružena Zátková. The present sheet remained in Benedetta’s possession until the late 1950’s, when it was acquired from her by the American collectors Mr. and Mrs. Harry Lewis Winston, who became close friends of hers. Beginning in the 1930’s, Lydia Winston Malbin (1897-1989) assembled a significant collection of major European art, with a particular focus on the work of the Italian Futurist artists. She acquired several works by Balla, for, as she noted in an interview, ‘I wanted atypical as well as typical works of artists to show the various aspects of an artist's work...in order to understand Balla you had to know what he was doing.’