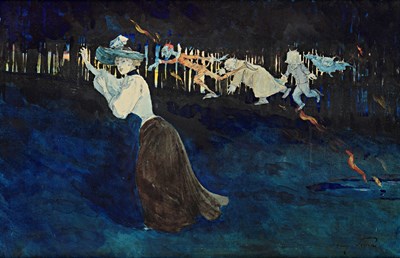 
The subject matter of Henry Somm’s drawings and watercolours tend towards elegant, often wistful young women, depicted with a particular delicacy of touch. The critic Louis Morin, writing in 1893, noted of the artist that ‘Somm is above all a painter. His pastels and water colors are much sought after; he has the painter’s eye to the highest degree imaginable...More than any other artist Somm is the painter of the Parisienne; not the society woman, but the prettily dressed girl who runs about the streets, her nose in the air, laughing unceremoniously at the compliments of the passers-by, and who sometimes enters the Moulin Rouge or the Elysée-Montmarte. It is by Somm’s works that she will live, this masterpiece of roguish grace, the grisette of Paris.’ Datable to the late 1880’s, the fantastic subject of this watercolour reveals another, darker aspect of Somm’s art. As the scholar Elizabeth Menon has written, ‘Throughout his career, Somm treated aspects of modern life that interested the Impressionists, as well as those that preoccupied Symbolist artists such as Théophile Steinlen, Félicien Rops, and Toulouse-Lautrec...During the tumultuous decade of the 1880s in France, the simultaneous presence in the graphic work of Henry Somm of Far Eastern motifs, scenes from Parisian life, social commentary, and elements of the macabre show how the artist responded – in surprisingly innovative ways – to the complex, coexisting currents of Japonisme, Impressionism, and Symbolism in French culture.’What appears to be a partial study in pen and ink for the woman in this composition appears on a sheet of studies of women in the collection of the Art Gallery of Ontario in Toronto. A watercolour of a similar subject by Somm, titled Les farfadets and depicting an elegant woman chased by goblins, was on the art market in Paris in 2007.

An Elegant Woman Chased by Demons