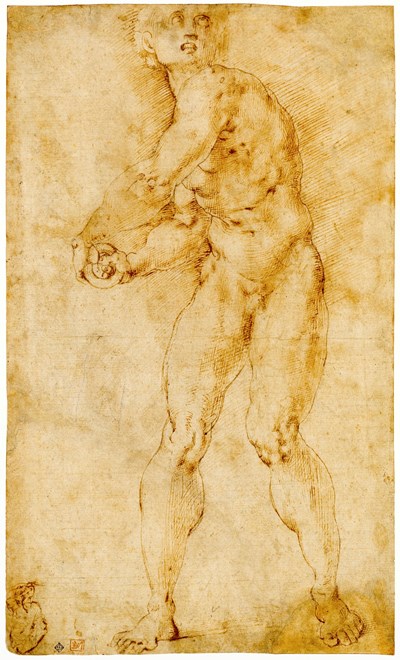 A Standing Male Nude, Holding onto a Ring and Looking Upwards


The attribution of this large and impressive double-sided drawing has been a matter of some scholarly debate. It would certainly appear to be by the same hand as a closely related pen and ink study of a nude model in a similar pose, on the recto of a double-sided drawing in the Kupferstichkabinett in Berlin. First published by Fritz Goldschmidt in 1915 as by Jacopo da Pontormo, the Berlin drawing was subsequently attributed to the same artist by Hermann Voss in 1920 and Bernard Berenson in 1938. In his groundbreaking book, The Drawings of the Florentine Painters, Berenson noted of the male nude on one side of the Berlin sheet that ‘The recto is not easy to recognize as P[ontormo], the hatching being so painfully Michelangelesque. And yet the swing of the contours seems to speak for him besides the fact that the other side is certainly by him.’ Indeed, the black chalk study on the verso of the Berlin drawing is unquestionably a preparatory study by Pontormo for one of the putti in his lunette fresco of Vertumnus and Pomona in the Medici villa of Poggio a Caiano, painted in the early 1520’s. In this respect, it may be significant that the small pen sketch at the lower left corner of the recto of the present sheet is closely related to three preparatory studies by Pontormo for the fresco at Poggio a Caiano, all in the Uffizi and drawn in chalk, each of which depicts a youth shielding his eyes. This seated figure does not, however, appear in the final lunette fresco.Although long attributed to Pontormo - and despite the fact that the chalk study on the verso is unquestionably by him - the male nude on the recto of the Berlin drawing was reattributed to Pontormo’s pupil Giovanni Battista Naldini in the 1960’s, first by Janet Cox-Rearick in 1964 and again by Paola Barocchi, in an article on Naldini’s drawings published the following year. In her catalogue raisonné of Pontormo’s drawings, Cox-Rearick noted that ‘A small number of drawings in pen and bistre occur at irregular intervals before 1530 in Pontormo’s oeuvre, but their appearance is quite incidental and the potential of this medium was never developed.’ As she believed that Pontormo only rarely drew in pen and ink alone, Cox-Rearick preferred to attribute the recto of the Berlin drawing to his disciple, Naldini. She went on to write of the recto of the Berlin sheet that, ‘Although it is the reverse of an authentic study, it is difficult to accept this ill-proportioned figure and crudely hatched technique as Pontormo’s. In Pontormo’s few pen studies pen was used for accents, or to define the structure of a figure under a wash, but never as an instrument for modeling form..this drawing is probably by Naldini.’ Naldini’s early drawings include a number of figure studies after Pontormo, and it cannot be argued that the present sheet is certainly indebted to the work of the elder artist. As an early 20th century scholar noted of Naldini, ‘This brilliant young draughtsman imitated chiefly, and with extraordinary ease and bravura, his master’s early manner...It is not surprising, then, that Pontormo’s early drawings have at times been confused with Naldini’s, or that, still more frequently, Naldini’s have been catalogued as Jacopo’s.’ Along with the Berlin drawing, Janet Cox-Rearick and Paola Barocchi identified a small group of Pontormesque drawings in pen and ink, all in the Uffizi and traditionally attributed to Pontormo, as probable works by Giambattista Naldini. (The present sheet may in particular be compared stylistically with one of these drawings; a study of Five Putti, in which the treatment of eyes and the pen hatching is similar to that of the standing male nude here depicted.) It should be noted, however, that more recently - in inventory catalogues published in 1986 and 1991 by Annamaria Petrioli Tofani - this group of pen and ink drawings in the Uffizi have been given back to Pontormo; an opinion seconded in the case of at least one of the drawings – a compositional study of God Commanding Noah to Build the Ark – by both Carlo Falcian and the late Edmund Pillsbury.Similarly, Elizabeth Pilliod has preferred to attribute the pen drawings in the Uffizi, as well as the present sheet, to Pontormo himself. As she further points out, the addition of a miniscule study at the lower left corner of the recto of this drawing is a highly characteristic feature of Pontormo’s drawings, but is not found in the drawings of Naldini. Although Philippe Costamagna has rejected the attribution of the Uffizi drawings to Pontormo, he has chosen to reserve judgment on both the present sheet and its counterpart in Berlin, which, it should further be noted, has always retained its traditional attribution to Pontormo.

A Standing Male Nude, Holding onto a Ring and Looking Upwards