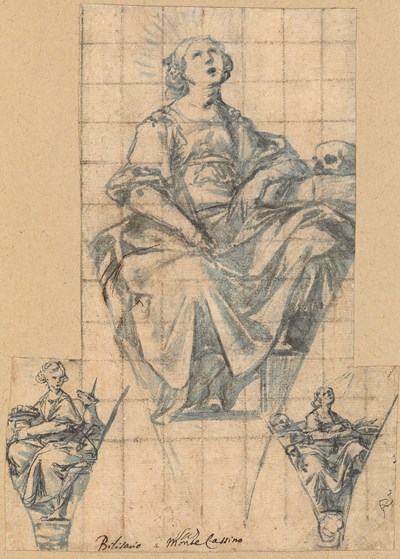 Brush and blue wash, with touches of pen and brown ink. Squared for transfer in black chalk. Inscribed Bilisario a Monte Cassino at the bottom. Rectangular sections at the central and upper portions of the left and right edges of the sheet cut out, and the whole sheet inlaid onto the mount.237 x 168 mm. (9 3/8 x 6 5/8 in.) at greatest dimensions.


As the old inscription at the bottom of the sheet notes, this drawing comprises preliminary studies for Corenzio’s frescoes in the dome of the Benedictine abbey at Monte Cassino, painted between 1625 and 1629 but destroyed in 1944, during the Second World War. The cupola of the dome was frescoed with a scene of The Glory of Saint Benedict, while the pendentives below were occupied by female representations of the four virtues required for monastic life, namely Poverty, Chastity, Contemplation and Obedience. The main figure in the present sheet would appear to be a study for Contemplation, with an alternative design for the same figure at the lower right, while at the lower left is a study for a figure of Chastity.This drawing was part of an album of drawings once in the possession of the 17th century collector Don Gaspar Méndez de Haro y Guzman, Marqués del Carpio y Helice (1629-1687), who served as Spanish ambassador in Rome from 1677 to 1683, and then as Viceroy of Naples from 1683 until his death. It was while he was living in Italy that Carpio assembled his large collection of drawings, arranged into some forty-three albums. The album in which the present sheet was included was, for the most part, made up of drawings by Neapolitan artists, and its contents were dispersed at auction in London in 1973. The group included a total of five drawings by Belisario Corenzio, each inscribed Bilisario in the same hand, which is thought to predate Carpio’s ownership.

Provenance:
From an album of drawings, mostly by Neapolitan artists, belonging to Don Gaspar Méndez de Haro y Guzman, Marqués del Carpio, Rome and NaplesThe album sold and dispersed at auction, London, Christie’s, 20 March 1973, the present sheet as lot 12Lorna Lowe, LondonPurchased from her in November 1973 by Ralph Holland, NewcastleThence by descent until 2013.