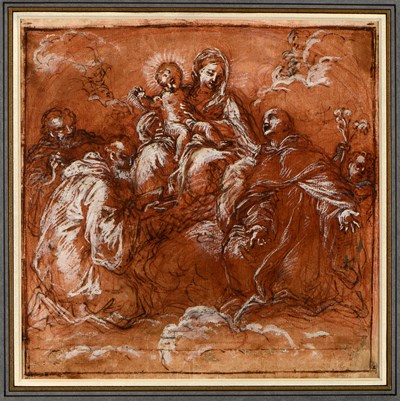 The Virgin and Child with Saints

Red chalk, pen and brown ink and brown wash, heightened with white, with framing lines in brown ink. A study of a mounted (female?) warrior in brown ink over red chalk, and a pair(?) of figures in red chalk, on the verso, backed. The sheet extended at the bottom edge, and made up at the lower right corner. Laid down. 230 x 226 mm. (9 1/8 x 8 7/8 in.)


This is a fine example of Giuseppe Passeri’s highly pictorial manner of draughtsmanship, displaying the artist’s characteristic use of red chalk combined with an extensive application of white heightening. (As one recent scholar has noted, ‘Bordering on the confectionary in their profuse use of white gouache, these [drawings] attain an unusually rich tonal and chromatic range close to that of an oil sketch.’) Although Passeri’s preparatory drawings tend to be very close to the paintings for which they are studies, the present sheet remains unrelated to any surviving work by the artist, although a red chalk drawing in the Biblioteca Nacional in Madrid, showing the Virgin and Child with a kneeling male saint, may perhaps be related to the same composition. Among stylistically comparable drawings by Passeri is a Virgin and Child with Saints Theresa and Cajetan(?), also in the collection of the Biblioteca Nacional in Madrid.The pen study of a mounted warrior on the verso of this drawing, now partly obscured by the backing of the sheet, may be tentatively related to a similar figure in a drawing of A King Before a Walled Town in the Museum Kunstpalast in Düsseldorf. The Düsseldorf drawing, which may represent a scene from Torquato Tasso’s epic poem Gerusalemme Liberata, is itself related to two drawings in the Royal Collection at Windsor Castle. A similar mounted figure also appears in a drawing of Clorinda Frees Sophronia and Olindo at Holkham Hall in Norfolk.

The Virgin and Child with Saints