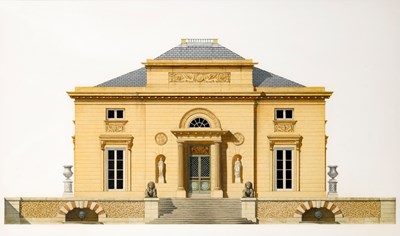 The Entrance Facade of the Château de Bagatelle Sold


The Château de Bagatelle, in the Bois de Boulogne in Paris, was a small neoclassical château built in 1777 by the architect François-Joseph Bélanger for the Comte d’Artois, the brother of Louis XVI. Marie-Antoinette, the Comte’s sister-in-law, famously wagered 100,000 livres that the new château could not be completed within nine weeks. The Comte won the bet, with the house completed in only sixty-four days by a team of nine hundred workers, at the cost of three million livres. The interior of the château, also designed by Bélanger, included six landscape paintings commissioned from Hubert Robert, while the extensive gardens - incorporating numerous architectural follies, including a Chinese Bridge, an Egyptian Obelisk, a Chinese Tent and a Philosopher’s Pavilion, all since destroyed - were laid out by Bélanger in collaboration with the Scottish gardener Thomas Blaikie. Bagatelle survived the Revolution largely intact, and in 1835 was purchased by Lord Hertford to house his collection, today the nucleus of the Wallace Collection in London. Now owned by the city of Paris, the château remains in the park today, albeit considerably altered, and this watercolour drawing records the original appearance of the entrance façade.The present sheet is one of a series of some fifty watercolours, by the architectural historians and illustrators Berndt Dams and Andrew Zega, of significant examples of garden architecture in France in the century and a half before the Revolution. As the late Charles Ryskamp has noted of these works, ‘The paintings are brilliant and original. The author/artists, American and German, have captured the French genius of these buildings through the medium of watercolor, which enables the rendition of various building materials and surfaces with remarkable versatility and sensitivity. The illustrations overcome the special problems of recreating the appearance of each building. The paintings are abstractions of the elevations of the main facades of each building; yet they are also informative of the architectural peculiarities of the entire structure. The resulting illustrations both document the architectural past and are modern works of art in their own right.’

The Entrance Facade of the Château de Bagatelle