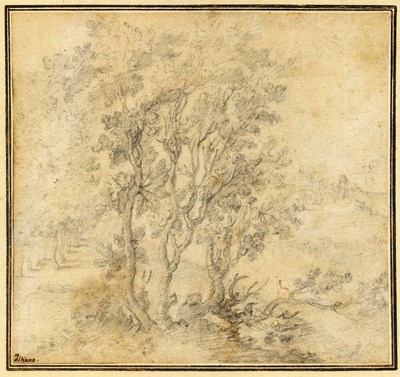 Landscape with a Grove of Trees, a Town in the Distance Sold


In his seminal account of 17th century Florentine painting, Filippo Baldinucci notes that Cristofano Allori made a number of landscape drawings in the environs of Florence: ‘Thus our painter had the idea of learning how to depict landscapes properly, and to that end he often left the city in order to reproduce, from nature, beautiful views of the countryside in red and black chalk; he drew many of these in a small sketchbook of square format ('quarto di foglio'), so pleasingly shaded ('macchiatte') that they look coloured, all of which are now in the possession of he who writes these words, and have been included to one of his two books containing drawings by the most excellent artists of that time, which he has collected.’ The landscape drawings by Allori which Baldinucci mentions as being in his own collection include a group of fifteen sheets, all apparently from one sketchbook and stylistically compatible with the present sheet, which are now in the Louvre. The attribution of this drawing to Cristofano Allori was first proposed by Miles Chappell. As Chappell has written of the artist, Allori ‘made many drawings of scenes and vignettes of nature...His picturesque views of Tuscan scenes with rustic houses and winding roads framed by twisting trees with sinuous branches and graceful, detailed clusters of leaves are unified by an atmospheric quality deriving from...soft, often blunt chalks.’ Allori may have used such sketches as studies for the backgrounds of his paintings. Chappell has further noted of the artist’s landscape drawings, made around the turn of the century, that ‘[Allori] absorbed the northern landscape style of Paul Bril and...like contemporary landscape artists in Florence such as Remigio Cantagallina and Jacques Callot, he was moving towards a fresher, more natural style.’A stylistically comparable landscape drawing, in black and red chalk and also attributed to Allori by Chappell, is in a private collection.

Landscape with a Grove of Trees, a Town in the Distance