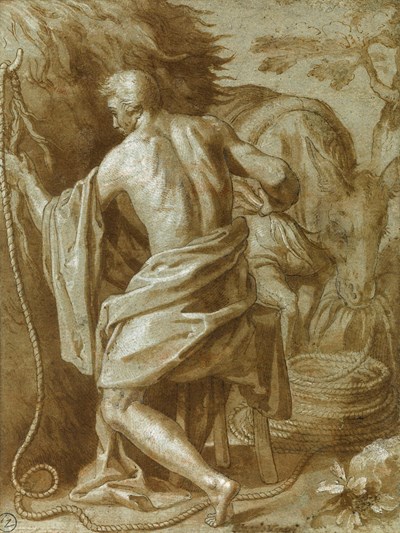 Ocnus: An Allegory of the Futility of Labour Sold

Pen and brown ink and wash, heightened with white, over an underdrawing in black chalk, on blue paper. The outlines of the main figure indented for transfer and the verso washed red. Inscribed Giorgio Vasari [cancelled] at the lower right.200 x 151 mm. (7 7/8 x 6 in.)


In its use of blue paper and its stylistic relationship with late 16th century Veronese and Venetian draughtsmanship, the present sheet may tentatively be dated to the early part of Jacopo Ligozzi’s career, while he was working in Verona or shortly after his arrival in Florence in 1577. Jennifer Montagu has pointed out that the unusual subject of this drawing derives from an ancient Greek painting by Polygnotus of the mythological character of Ocnus (or Oknos); a figure symbolic of futility, or unending labour. Ocnus was condemned to spend eternity weaving a rope of straw which, in turn, was eaten by a donkey almost as fast as it is made. As Montagu notes, Ocnus ‘had an extravagant wife who spent everything he earned by his labours; he is represented as a man twisting a cord, which an ass standing by eats as soon as he makes it, whence the proverb ‘the cord of Ocnus’ often applied to a labour which meets no return, and is totally lost.’ This unusual subject is extremely rare in 16th or 17th century Italian art.Many of Ligozzi’s highly finished drawings were executed as independent works of art, and this may be true of the present sheet. However, the partially incised contours of the figure, and the red wash applied to the verso of the sheet, would suggest that the drawing may have been preparatory to a print, possibly a chiaroscuro woodcut. A handful of allegorical drawings by Ligozzi were in fact reproduced as chiaroscuro woodcuts in c.1585 by the Mantuan engraver Andrea Andreani (c.1546-1623), and the artist’s technique, with its emphasis on strong lines and tonal contrasts, lent itself well to the particular demands of the chiaroscuro medium. Ligozzi’s reputation as a designer of innovative allegorical compositions was well established early in his career and, as one scholar has recently noted, he ‘produced (and was most probably the originator of) ingenious allegorical compositions…The content of Ligozzi’s drawings is often very unusual and their sources are extremely unexpected.’ Similar allegorical subjects occur in other finished drawings by Ligozzi, such as an Allegory of Envy and an Allegory of Vanity in the Kestner Museum in Hannover, both signed and dated 1590, as well as an Allegory of Avarice in the National Gallery of Art in Washington, D.C. and an Allegory of Charity, Justice and Strength in the collection of the Bibliothèque Nationale in Paris.

Ocnus: An Allegory of the Futility of Labour