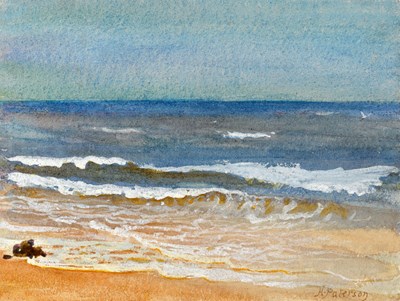 Study of Breaking Waves on a Beach Sold


Only a handful of early watercolours by Helen Allingham and signed with her maiden name of Paterson have survived. In the summer of 1872 the young Helen Paterson was invited by the artist Briton Riviere to join him and his family at St. Andrew’s in Scotland, where she produced her first landscape watercolours. As a contemporary biographer noted of this summer, ‘It was not, however, in the grey houses and uninteresting streets of this old northern university town, to which she first turned, that the true relations between tone and colour discovered themselves to her longing eye, but amongst the sandbanks, seaweed, and blue water which fringe its noted golf-links. For the first time the artist felt herself happy in attempting to work in any other medium than black and white.’ In its freedom of handling and vibrant colour, the present sheet is unusual among the artist’s works; another watercolour of breaking waves, closely comparable in style and technique though somewhat smaller, was on the London art market in 1986. The present sheet may be also compared stylistically with a handful of similar watercolours by Allingham, such as a view of a sunset in Venice, recently sold at auction in London.

Provenance:
Given by the artist to Mary Walen in April 1897, according to a dedication on the verso.

Study of Breaking Waves on a Beach