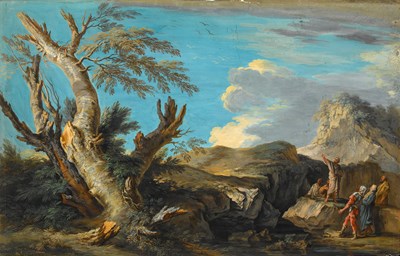 A Mountainous Landscape with Figures, after Salvator Rosa Sold


The present sheet records the composition of a now-lost painting by Salvator Rosa, which is only known today from an etching in reverse by Goupy himself. The print is entitled ‘Augures’ (The Augurs) and is inscribed ‘Salvator Rosa pinxit’ and ‘Jos. Goupy fecit Londini’. The fact that the verso of this gouache is blackened would suggest that the present sheet was, in all likelihood, the artist’s preparatory drawing for the etching, which he then worked up with gouache to create an independent, finished work of art. Goupy is known to have made etchings after some ten paintings by Rosa, as noted by the 18th century writer George Vertue, who recorded prints ‘Etch’d by Joseph Goupy from several rare original pictures of Salvator Rosa in the Collections of the Curious. This work, gave great satisfaction being done in the stile of Salvator, well imitating his freedom & Spirit.’ As the contemporary English artist and writer William Gilpin further noted, ‘GOUPY very happily caught the manner of SALVATOR; and in some things excelled him. There is a richness in his execution, and a spirit in his trees, which SALVATOR wants…Landscape is his fort.’ A modern scholar has echoed this view, writing that ‘If one was to state a preference for an engraver [in reproducing the compositions of Salvator Rosa] then the work of Joseph Goupy stands out for its sensitivity, particularly as he adopts Rosa’s etching style in which to reproduce the paintings – doing Rosa in reverse, as it were.’ Goupy’s particular fondness for Rosa’s work may well have been the result of his association with Marco Ricci.A somewhat smaller gouache variant of the composition of the present sheet, with numerous differences and less overtly horizontal in format, is in the collection of the British Museum. Other comparable gouache drawings by Goupy after Salvator Rosa include a Tobias and the Angel, derived from a painting by Rosa in the National Gallery in London, which appeared at auction in 1998, while a gouache variant of the same Tobias composition, together with a pendant of The Dream of Jacob, also after a Rosa painting now at Chatsworth, is in a private collection in Madrid. Another gouache drawing by Goupy after Rosa’s The Dream of Jacob is in the collection of the Cleveland Museum of Art.

A Mountainous Landscape with Figures, after Salvator Rosa