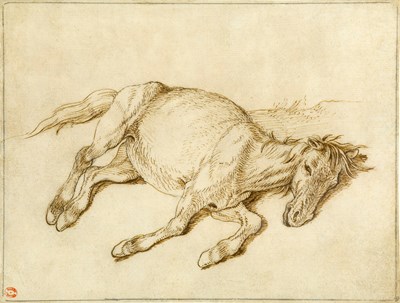 A Horse Lying Down Sold


Sinibaldo Scorza produced numerous independent drawings of animals, to be used when needed as motifs for his paintings and engravings. Indeed, most of his extant drawings are studies of animals, alongside a handful of landscape and figure drawings. Soprani noted of the artist that he filled two albums with drawings of animals and landscapes, which he had intended to have engraved, although he died before achieving this goal.Among stylistically comparable pen drawings by Scorza is a study of a standing cow in the Czartoryski collection at the Muzeum Narodowe in Cracow and a drawing of a saddled, grazing horse, which appeared at auction in London in 1997. A closely related study of a standing horse, of similar technique and dimensions, was also in the Carlo Prayer collection and appeared with the present sheet on the art market in 1989.

A Horse Lying Down