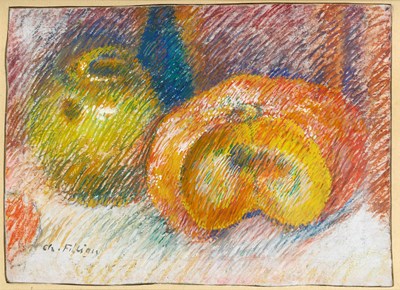 Still Life with a Pot and Pumpkin Sold


Included in several recent exhibitions, the present sheet is an early work by the artist, who signed his name with two L’s – the correct spelling of his family surname – only at the beginning of his independent career. Like many of his contemporaries, Filiger briefly experimented with the pointilliste technique in the late 1880’s, and he exhibited two small pointillist watercolours at the fifth Salon des Indépendants in 1889. Still life subjects, however, are very rare in Filiger’s oeuvre.

Provenance:
Melina RoddeGiven by her to her son Léon Rodde in February 1929Yves Diguet, Auvers-sur-OiseAcquired from him by a private collector in 1980Samuel Josefowitz, Lausanne.

Still Life with a Pot and Pumpkin