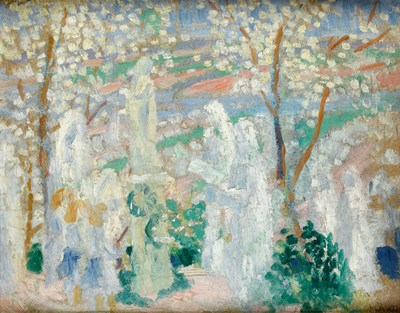 
This oil sketch is closely related to, and may be a preparatory study for, Maurice Denis's large painting of The Virgin and Child in a Spring Landscape, signed and dated 1907, formerly in the Henri Aubry collection in Paris and today in the Yamazaki Mazak Museum of Art in Nagoya, Japan. The main difference is that in the present work the figures surround a statue of the Virgin, while in the painting the statue is replaced by the seated Virgin and Child. The landscape depicted in both painting and sketch is the hillside of Mareil, near Saint-Germain-en-Laye.The composition of this oil sketch is also related to The Madonna, one of four panels of the decorative scheme entitled Eternal Spring, painted in 1908 for the dining room of the villa of Denis’s patron Gabriel Thomas at Meudon. The murals remained in situ until the death of Thomas’s grandson in 1986, and are today in the Musée Départemental Maurice Denis in Saint-Germain-en-Laye. The painted panel, like the present sketch, depicts nuns and young communicants gathered around the Virgin and Child in a landscape, although unlike the oil sketch it is vertical in format.A stylistically similar, rapidly-executed oil sketch on cardboard by Maurice Denis, today in a private collection, is a study for The Oratorio, part of the lost decoration entitled Eternal Summer, painted in 1905 for the music room of Kurt von Mutzenbecher in Wiesbaden in Germany; a project which seems to have inspired the Eternal Spring cycle for Gabriel Thomas three years later.The present work belonged to the artist’s daughter, the poet Anne-Marie Poncet-Denis (1901-1994), who sold it to a private collector in 1962.

Provenance:
The artist’s studio, and by descent to his daughter Anne-Marie Poncet-Denis, VichAcquired from her by a private collector in 1962Galerie Paul Vallotton, Lausanne (no.3809)Anonymous sale, Paris, Christie’s, 1 December 2006, lot 67Private collection, Europe.