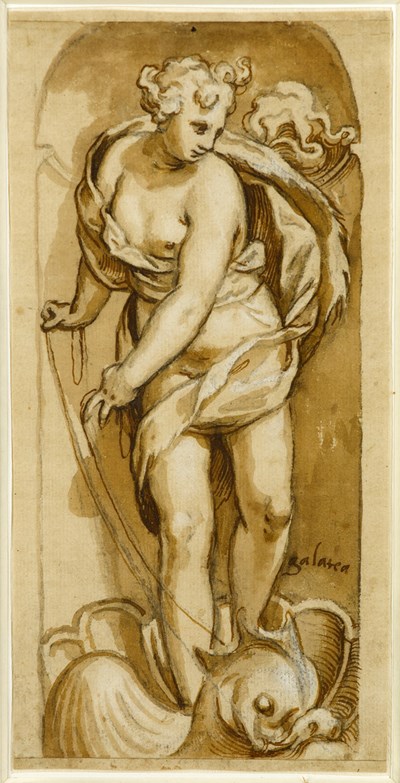 Pen and brown ink and brown wash, over an underdrawing in black chalk, with touches of white heightening on light brown paper, backed. The sheet extended with strips of paper at the top and bottom edges. Inscribed (by the artist) galatea at the lower right. Inscribed (by William Gibson) P. Farinato 4.1. on the verso. Further inscribed P. Farin- and 8 42. on the verso. 284 x 140 mm. (11 1/8 x 5 1/2 in.)


Depicting the sea nymph Galatea riding on a shell drawn by dolphins, this is a fine and typical example of Paolo Farinati’s distinctive draughtsmanship. The placement of the figure in a niche would suggest that the drawing was intended to prepare a painted mural decoration in a palace or villa; one such example - a detached fresco by Farinati of a female mythological figure in a niche – is in the Museo Civico in Verona. A large drawing by Farinati of this sort of wall decoration, with a mythological figure in a niche flanked by herms and a frescoed landscape, was recently acquired from a private collection by the British Museum. A stylistic comparison may be made with several drawings by Farinati, such as a study of Abundance at Windsor Castle. A similar figure of Galatea standing on a seashell drawn by dolphins appears in a drawing by Farinati of The Triumph of Galatea, dated September 1586, which was formerly in the Michel Gaud collection in St. Tropez. This drawing bears on the verso the distinctive price code (‘P. Farinato 4.1’) of the 17th century miniature painter and collector William Gibson (1664-1702). Gibson was one of the major purchasers at the auction of the drawings collection of Sir Peter Lely in 1688, and the price code he inscribed on the verso of the drawings he owned was apparently intended to help his widow in valuing the drawings in his collection after his death. Gibson seems to have owned a large number of drawings by Paolo Farinati, many of which had earlier belonged to Lely. A number of these are today in the Royal Collection, including one drawing of a similar subject, depicting Neptune Standing in a Chariot drawn by Two Sea-Horses. It is thought that Gibson’s Farinati drawings may have been part of an album of drawings by the artist originally acquired by Lely for his collection.