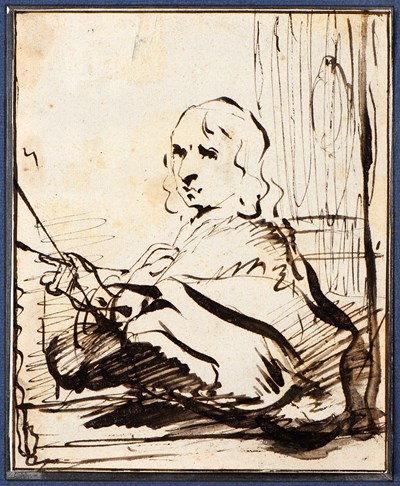 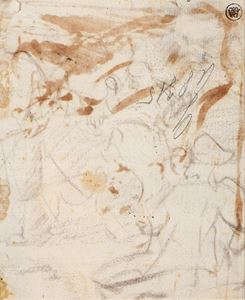 Portrait of a Painter, possibly a Self-Portrait Sold


Only a handful of portrait drawings by Govert Flinck are known. Drawn with a quick and spontaneous pen line, the present sheet may be dated to the second half of the 1650s, and shows the influence on the artist of the pen drawings of Rembrandt. Among stylistically comparable pen and ink drawings by Flinck is a half-length study of an archer, in the collection of the Herzog Anton Ulrich-Museum in Braunschweig and a drawing of a Woman Seated at a Table in the Louvre. In his magisterial corpus of Flinck’s drawings, Werner Sumowksi further likens the present sheet to a signed and dated drawing of a Scholar in his Study of 1656, in the Heyblocq album amicorum in the collection of the Koninklijke Bibliotheek in The Hague, as well as to pen and ink drawings by Flinck of an Old Man Seated in the National Gallery of Victoria in Melbourne, a Standing Young Man with a Hat in the Louvre and a Young Man with a Staff in the Nasjonalgalleriet in Oslo.The painter in this drawing is shown holding a mahlstick, paintbrush and palette, with what seems to be another palette hanging on the wall behind him. The attitude of the sitter, who looks directly at the viewer, gives the drawing the manner of a self-portrait, and indeed there is a certain physiognomical resemblance with Flinck’s self-portrait in the left background of his large canvas of The Civil Guard of Amsterdam Celebrating the Peace of Westphalia, painted in 1648 and today in the Amsterdam Museum in Amsterdam, as well as with a self-portrait of 1643, long thought to be lost and today in the Leiden Collection in New York. Similarities may also be noted with an oval portrait of Govert Flinck by Gerard Pietersz. van Zijl, which was engraved by Abraham Blooteling. Although the identification of the sitter of this drawing as Flinck himself was accepted by Frits Lugt, H. van Hall and Jeroen Giltaij, Werner Sumowski does not believe the present sheet is a self-portrait.The very faint sketch in black chalk on the verso of the present sheet shows what appears to be a Biblical scene, which Sumowksi has suggested may represent Joseph’s Bloodstained Cloak Shown to Jacob or Potiphar’s Wife Accusing Joseph. If it is the former, then it may possibly be related to both a drawing of this subject, in the Musée Fabre in Montpellier, and a painting, dated 1655, which is today in the Sinebrychoff Art Museum of the Finnish National Gallery in Helsinki.

Portrait of a Painter, possibly a Self-Portrait