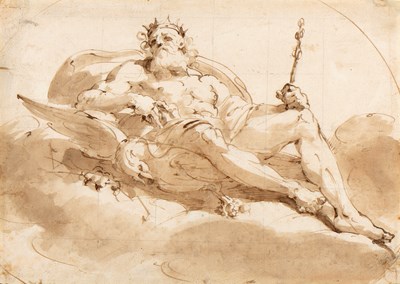 
This drawing is a preparatory study, in reverse, for one of Ubaldo Gandolfi's first independent projects, the vault fresco of Jupiter in the Sala dello Zodiaco of the Palazzo Malvasia in Bologna, now part of the University of Bologna. In around 1758 Gandolfi received a commission from the Bolognese nobleman and historian Cesare Malvasia to decorate a number of rooms in his palace, purchased the previous year. The commission called for the decoration of at least four rooms with vault frescoes of Jupiter, Mars, Apollo, and Mercury. Only the frescoes of Jupiter, Mars and Apollo survive today, executed in collaboration with quadraturista Flaminio Minozzi, who was responsible for the architectural elements. The work must have been completed by 1760, when Ubaldo Gandolfi listed the frescoes among his accomplishments in his application for admission into the Accademia Clementina.Two further related drawings for the fresco of Jupiter are known. The first of these, in the collection of the Pinacoteca di Brera in Milan, depicts an angry Jupiter in the act of hurling his thunderbolts, and must be an early idea for the project. The other drawing, formerly in a private Italian collection, retains much the same composition as the present sheet, although in reverse, and as such is closer to the reclining god depicted in the finished fresco. The present sheet must therefore represent an intermediate stage in the development of the composition.