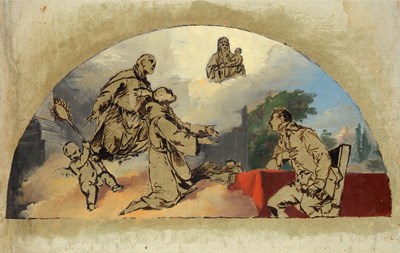 
Despite the fact that Pietro Fancelli owed much of his success to his skill and inventiveness as a draughtsman, only a fairly small corpus of drawings by him survives, in which the combination of his Venetian training and Bolognese heritage can be seen. Although this drawing remains unrelated to any known work by the artist, its lunette shape is similar to that of another drawing by Fancelli; a study of La Beneficenca in the Schloss Fachsenfeld collection at the Staatsgalerie in Stuttgart. The Stuttgart drawing served as a design for a sephulcral monument, one of several that Fancelli produced, in the early years of the 19th century, for the newly built cemetery of the Certosa, just outside Bologna. Although somewhat unusual in composition, the present sheet may have also been intended for a similar purpose.A terminus ante quem for this large sheet is provided by the fact that it is drawn on the reverse of the cover of the Pinacoteca della Pontificia Accademia di Belli Arti in Bologna, published by Francesco Rosaspina in 1830.