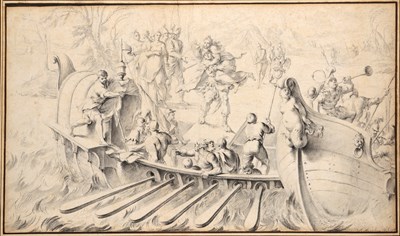 The Abduction of Helen


The delicate handling of stumped black chalk in the present sheet is a typical feature of Aureliano Milani’s draughtsmanship, and may be likened to that in a number of large, finished compositional drawings by the artist which exist both as studies for easel pictures as well as independent works in their own right. Such drawings by Milani include a Samson Defeating the Philistines in the National Gallery of Canada in Ottawa, The Harpies Disrupt the Meal of Aeneas and the Trojans in the Pinacoteca Nazionale in Bologna, and An Old Man Tormented by Demons and Attended by an Angel in the Metropolitan Museum of Art in New York; all are stylistically comparable to the present sheet. Also somewhat comparable is a large drawing of The Bearing of the Cross in the Louvre, which is a preparatory study for an enormous etching by the artist, executed in 1725, and a drawing of The Stoning of Saint Stephen, formerly in the Horvitz collection.No related painting of this subject by Milani is known, nor is one mentioned in the list of the artist’s works included in Luigi Crespi’s biography. It is likely, therefore, that the drawing was executed as an autonomous work of art, destined for sale to a collector. This is also suggested by the full signature ‘Io Aureliano Milani F’ at the lower right corner of the sheet. An almost identical signature (‘Io Aureliano Milani F. 1726’) is found on a drawing of The Assumption of the Virgin in the collection of the Philadelphia Museum of Art.

The Abduction of Helen