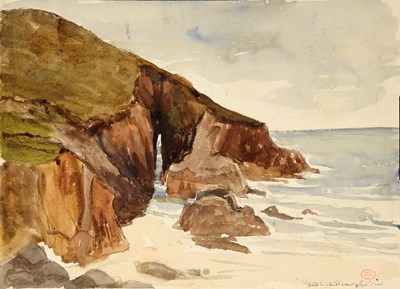 The ‘Song of the Sea’ Cliffs at Nanjizal Cove, Land’s End, Cornwall


The present sheet may be dated to the summer of 1862, when Paul Huet made his first and only visit to England. As might be expected given his abiding interest in the English school of landscape painting and drawing, Huet made a number of sketches on his travels which, apart from London and Windsor, included visits to Tunbridge Wells, Salisbury and Stonehenge. He also visited Devon and Cornwall in southwestern England, a region he particularly admired, and which reminded him of his beloved Normandy. As Huet wrote to his wife in a letter of July 1862, ‘Nous sommes dans le véritable Cornwall, pays vraiment pittoresque, l’ancienne Bretagne qui est à l’Angleterre ce que la Bretagne française est à la Normandie…Des détails charmants, une fraîcheur inouïe, expression générale de toute l’Angleterre et beaucoup de rapports avec la Normandie et l’entrée de la Bretagne, voilà ce que vous trouverez.’ Huet’s travels took him as far west as Land’s End, where he made several watercolour views of some of the distinctive sights of the surrounding area, such as the balancing Logan’s Rock at Treen and the present view of the sea cliff known as the Song of the Sea.

Provenance:
In the artist’s studio at the time of his death, with the atelier stamp (Lugt 1268) at the lower rightBy descent in the family of the artist, until 2014.

The ‘Song of the Sea’ Cliffs at Nanjizal Cove, Land’s End, Cornwall