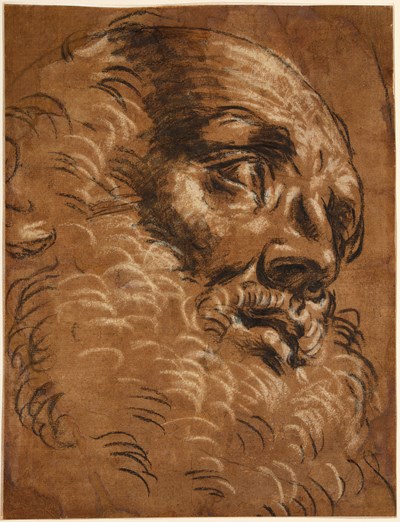 Charcoal, heightened with white chalk, on paper washed a light brown. Made up at the lower left and right and upper right corners. Numbered 18. and inscribed Domenichino / St. Gerolamo on the reverse of the old mount. Inscribed Original sketch of the Head of St. Gerome for his picture of the / Communion, now at Rome – by Domenichino and numbered 16 on the album page on which this drawing was formerly mounted.271 x 203 mm. (10 5/8 x 8 in.)


Previously attributed to Domenichino, this drawing cannot be related to any surviving work by Giacomo Cavedone, although the facial type and morphology of the model is entirely typical of the artist. A similar drawing of a bearded man, of identical technique, was formerly in the Horvitz collection; this was a study for the head of Saint Joseph in Cavedone’s altarpiece of the Adoration of the Magi of 1614, in the Bolognese church of San Paolo Maggiore. The present sheet may further be compared with several examples from a group of fifty drawings of male and female heads in the Royal Library at Windsor Castle. The Windsor drawings by Cavedone were assembled in an album, described in a late 18th century inventory of King George III’s collection as ‘Teste di Cavedone. Although slight yet drawn with great fire and spirit, most as large as life.’ Other drawings by Cavedone of this type are in the Art Institute of Chicago and the Cleveland Museum of Art.Laura Giles has kindly pointed out that a drawing of the same head in an identical pose, larger than the present sheet and showing more of the neck and head, is in the Royal Collection at Windsor Castle.

Provenance:
From an album of miscellaneous, mostly Bolognese drawings, assembled by a certain Mr. Yeates in Italy in 1823 (according to an inscription on the first page of the album)Anonymous sale, London, Sotheby’s Olympia, 11 December 2002, lot 30Jean-Luc Baroni Ltd., London, in 2003Private collection.