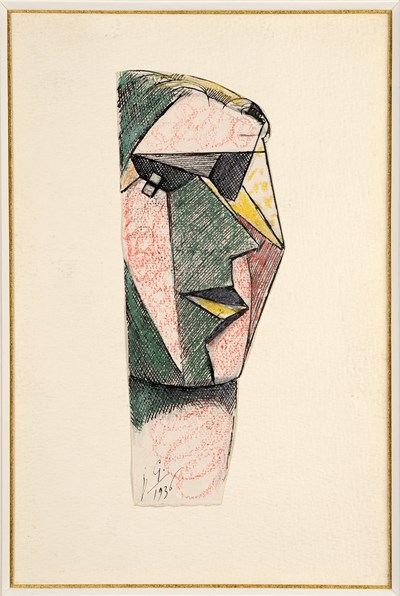 Coloured wax crayons, India ink and pencil on paper trimmed to shape and laid down onto another sheet. Signed with initials and dated JG / 1936 at the lower left. Inscribed visage étroit nez (the last two words overwritten Cubiste) on the verso of the backing sheet.Further inscribed F and Raisonné on the reverse of the backing sheet. 211 x 79 mm. (8 3/8 x 3 18 in.) [sheet, at greatest dimensions]280 x 188 mm. (11 x 7 3/8 in.) [backing sheet]


This drawing may be grouped with a large number of studies of heads with faceted, cubistic forms, produced by González between 1936 and 19373, many of which seem to be related to sculpted heads carved in stone between about 1932 and 1936. Common to most of these drawings is a use of crayons or watercolour in three colours, according to a simple formula adopted by the artist, with yellow for light areas, green for dark or shaded zones and red for intermediate areas. Examples of drawings of this type are in the collections of Tate Modern in London, the Museo Nacional Centro de Arte Reina Sofía in Madrid, the Musée National d’Art Moderne in Paris, the Fondation Maeght in Saint-Paul de Vence and the Berardo Collection Museum in Belem, Portugal.The present sheet once belonged to the notable French collector Gildas Fardel (1906-1997), who assembled a significant group of 20th century abstract works. In 1958 he gifted a part of his collection to the Musée des Beaux-Arts in Nantes, followed by further donations to the same museum in 1969, 1972 and 1989. Fardel owned several drawings and sculptures by Julio González, including a 1941 self-portrait drawing now in Nantes, as well as some works by the artist’s daughter Roberta. The present sheet, however, remained in Fardel’s collection until his death.