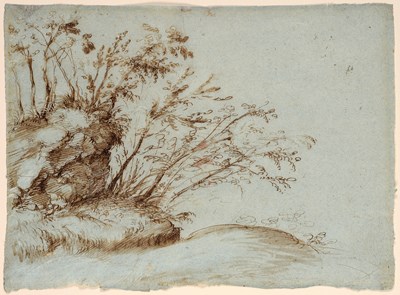 A Rocky Outcrop with Trees Sold


A page from a sketchbook, this drawing may be included among a large group of landscape studies, each drawn in a distinctive hand and many bearing dates in the second half of the 16th century, which were first assembled by Jaap Bolten in 1969 under the name of ‘Messer Ulisse Severino da Cingoli’; the name inscribed on one of three albums of landscape drawings by this artist in the Biblioteca Comunale in Jesi1. Twenty years later, however, the artist was firmly identified by Arnold Nesselrath as one Gherardo Cibo, an artist of noble Genoese origins who was an accomplished botanist as well as a composer of lute music. The present sheet, in exceptional condition, was once part of an album of drawings by Gherardo Cibo, all on deep blue paper, which was sold at auction on London in 1960. Other drawings from the album, now known as the A. Bruce Thompson or San Quirico album, are today in the collections of the Rijksmuseum in Amsterdam, the British Museum in London, the Detroit Institute of Arts, the Los Angeles Country Museum of Art, the Morgan Library and Museum and the Metropolitan Museum of Art in New York, the Princeton University Art Museum and the National Gallery of Art in Washington, D.C., as well as in several private collections. Among stylistically comparable drawings on blue paper by Cibo, all from the same album as the present sheet, is a hilly landscape in the Princeton University Art Museum and a Hilly Landscape with Ships in the National Gallery of Art in Washington, D.C.As a recent scholar has noted, ‘That Cibo would eventually be regarded as one of the most delightful and original Italian landscapists of the sixteenth century is an unexpected reward for this gentil’ huomo who never received classical training as an artist and who may well have regarded his activities as a landscape draftsman as little more than a pleasurable distraction.’ The Cibo scholar Lucia Tongiorgi Tomasi adds, ‘Profound artistic sensibility, scientific knowledge and technical skill characterise the work of this notable sixteenth-century artist...Gherardo Cibo could also be considered as the very embodiment of that fascinating Renaissance ideal – the ‘artist-scientist-dilettante’. He was a precocious interpreter of the new and highly successful formula which was to unite the Italian and Flemish pictorial traditions.’

A Rocky Outcrop with Trees