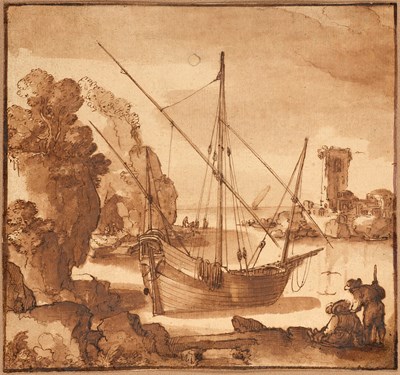 A Boat in a Harbour Sold


The drawings of Cantagallina and his younger contemporary Baccio del Bianco (1604-1657) have often been confused, as both draughtsmen worked in a similar style. A comparable pen landscape of boats in a natural harbour in the Biblioteca Marucelliana in Florence has, for example, been attributed to Baccio del Bianco1. Similar studies of boats are, however, to be found in the Cantagallina sketchbook in Brussels, drawn during a trip the artist made to the Low Countries between 1612 and 1613. Another, similar drawing of a boat in the Musée des Beaux-Arts in Rennes3, attributed there to Baccio del Bianco, is also likely to be by Cantagallina. Two further drawings by Cantagallina of coastal landscapes with shipping, more expansive in composition, were also at one time in the collection of Christian Humann.

A Boat in a Harbour