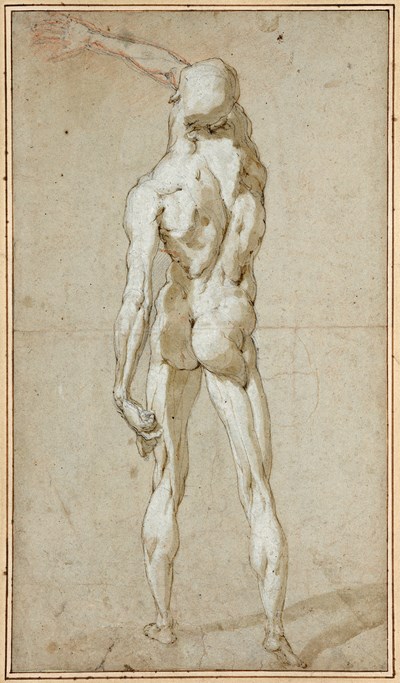 A Flayed Male Nude, seen from Behind, after Pietro Francavilla Sold


The present sheet is one of four large drawings of the same flayed male figure by Boscoli. Two studies in the Uffizi, both drawn on blue paper, show the same figure from the right side and from the front, and strongly lit from the left. Monique Kornell has noted of the Uffizi drawings that ‘the evocative use of lighting, characteristic of the style of the Florentine draughtsman, matches the dramatic nature of the pose...The figure arches its back with its right arm flung across its body.’ Similarly, Julian Brooks commented on ‘Boscoli’s characteristically strong chiaroscuro’ in these drawings, and adds that they ‘seem more concerned with with the general effect created by the dramatic pose and taut musculature than the intricate detail per se.’ Another drawing by Boscoli, with two separate studies of the same flayed figure together on one sheet, was sold at auction in New York in 2002. For each of these drawings, Boscoli has copied, from several different angles, a bronze statuette of a flayed man by the Franco-Flemish sculptor Pietro Francavilla (1548-1615), a pupil and assistant of Giambologna in Florence. The only extant cast of this écorché sculpture is today in the Jagiellonian University Museum in Cracow in Poland, where it has been recorded since the late 18th century. As Anthea Brook has noted of Francavilla’s bronze, ‘in this statuette the mannerist delight in the intricacies of contrapposto is taken to unusual lengths. The static poses of earlier anatomical illustrations of the 15th and 16th centuries were developed by the time of Vesalius’s Treatise (1543) into a more mannerist style, in which the bend of the heads and the gestures if the hands are expressive and pathetic. It would be indeed be difficult to find a more instructive example of mannerist sculpture than the present statuette.’ The Florentine biographer Filippo Baldinucci wrote of Francavilla that he produced a number of écorché statuettes in terracotta that were cast several times and were avidly studied by artists.Nadia Bastogi has noted in particular ‘the heroic dynamism of these anatomical studies’ by Boscoli, and has dated these drawings, with their painterly use of white heightening on blue paper, to the final years of the 16th century.

A Flayed Male Nude, seen from Behind, after Pietro Francavilla