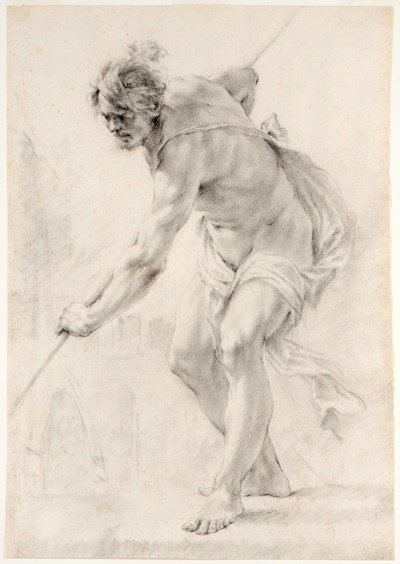 Study of a Male Nude Holding a Pole Sold


This large sheet may be closely compared with a group of seven academic drawings by Francesco Monti, all of similar dimensions and technique, in the collection of the Pinacoteca Nazionale in Bologna. A characteristic of these drawings are the sophisticated, if somewhat artificial, poses and a faintly sketched landscape background (which in the case of this drawing seems to be of an architectural nature), as well as the use of various costume props such as helmets, turbans, knives or staffs. Furthermore, the same model also appears to have posed for several of the drawings of this group. Apart from the seven drawings in Bologna, a handful of other, comparable drawings of male academies in black chalk by Monti are known. These include a study of a Draped Male Nude, Wearing a Helmet and Holding a Dagger, formerly in the Horvitz collection, and a Standing Male Nude in a Hat Holding a Staff, which appeared at auction in 1999. It has been suggested that these drawings, which are all of a similar size, may have once formed part of a large sketchbook.This distinctive group of drawings of male nudes may be dated to Monti’s Bolognese period, when he was closely associated with the Accademia Clementina in the city, and before his departure for Brescia in 1736. As Mimi Cazort has written, ‘Characteristic of the style which Monti used for these drawings, here defined in terms of the usage of the medium and called the “soft chalk style”, are the smooth blending of the chalk from dark into light areas, with secondary lighting at the edges of the darkest shadow areas and little or no visible hatching; the irregularly accented but complete chalk contour around each figure; and, a particular idiosyncracy of Monti’s, the use of vertically aligned, streaky modeling with precise attention to details of musculature.’The handling of black chalk in drawings such as this suggest that Monti must have seen and studied the male nude academies of his Venetian contemporary Giovanni Battista Piazzetta (1682-1754), and indeed many of these drawings, including the present sheet, were at one time attributed to the latter artist. As Cazort has pointed out, ‘It is safe to assume that Monti was well acquainted with Piazzetta’s drawings not only because of the Venetian artist’s prestige but because of their mutual involvement during the 1720’s in the last of the Bolognese academies, the Accademia Clementina: Piazzetta was made an honorary member of the Accademia in 1725 and Monti was elected its Principe for the years 1726-27. Since a chief requisite for the honors of the Academy was facility in draughtsmanship, academic drawings in particular, it is likely that Monti knew Piazzetta’s drawings in this mode and emulated them...Piazzetta’s attitude toward the figure and his handling of the chalk was basically a Bolognese rather than a Venetian one which can be traced in a straight line back to the Carracci and forward to the Gandolfi. It may have been precisely this “Bolognese” quality which Monti found so congenial because of his own training in the same tradition.’

Study of a Male Nude Holding a Pole