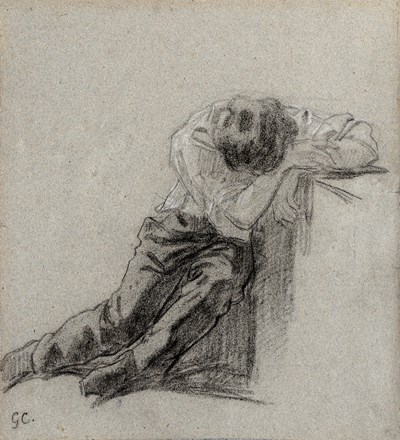 Study of a Seated Man Asleep Against a Table Sold


Apart from three small sketchbooks in the Louvre, Courbet’s oeuvre as a draughtsman consists of a few dozen individual drawings – portraits and self-portraits, figure or genre studies, and some landscapes – drawn in charcoal, black chalk, or pencil, or a combination of these. As Marget Stuffman has noted, ‘In his approach to drawing, Courbet was not alone in his day in preferring the more suggestive effects of charcoal and crayon over the precisely descriptive quality of pencil...Having worked as a lithographer in his early years in Besançon, Courbet as draftsman was able to deploy the structural characteristics and the opportunities the medium offered for coherent pictorial effects thanks to his confident handling of tonal values, dense layering, and emphasis on light patches in dark areas.’ While Courbet’s drawings of the late 1840s were mostly large-scale portraits of friends, family and himself, the following decade saw the artist treat genre subjects as well. Of his genre drawings of this period, one recent scholar has noted, ‘Courbet’s drawing exemplifies a new tendency, more legitimately Realist, to show figures in their context and in the way a casual visitor or passerby (flaneur) might have observed them. Coupled with this is a tendency to place the model farther from the picture plane, thus increasing the impression of casually observing a human being rather than closely examining a specimen.’The act of sleeping or resting is something of a leitmotif that runs through Courbet’s oeuvre over his entire career. It occurs in several paintings and individual drawings, as well as in a number of pages of the sketchbooks in the Louvre. As has been noted of the artist, ‘Courbet’s fascination with scenes of sleeping and the postures that accompany dreaming is evident in many of his works...From the outset, Courbet portrayed people sleeping or taking afternoon naps, and we find them, too, drowsing over a book...’In the present sheet, it is also interesting to note the possible influence on Courbet of Goya’s famous etching The Sleep of Reason Produces Monsters from the Los Caprichos series of 1797-1799, in which a very similarly posed figure appears, albeit in reverse.

Study of a Seated Man Asleep Against a Table