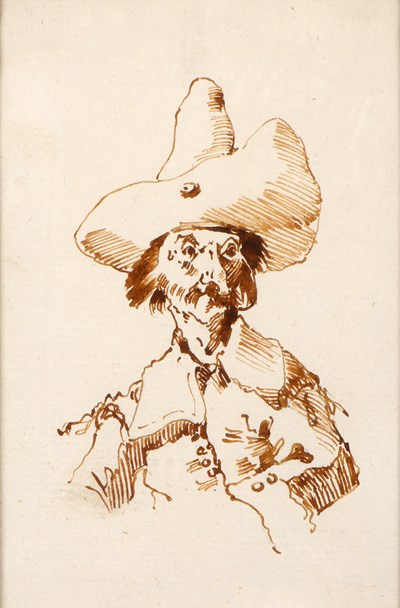 Caricature of a Man in a Tall Hat Sold


Among the artists working in Venice, only a handful produced caricature drawings in pen and ink, notably Giovanni Battista Tiepolo and Anton Maria Zanetti. Like Tiepolo, Marco Ricci may have been inspired by the caricature pen drawings of such 17th century artists as Annibale Carracci, Pier Francesco Mola and Guercino.The attribution of this drawing to Ricci was first proposed by Janos Scholz. Although not itself related to a print, the present sheet is likely to date from the last years of Marco Ricci’s career, when he produced most of his printed work. Among stylistically comparable figure drawings by the artist are a study of Three Men Resting near a Pyramid in the Fogg Art Museum in Cambridge, MA1 and a drawing of Pilgrims Resting in the Princeton University Art Museum; the latter was reproduced as a print by Ricci. Also of the same type is a signed pen drawing of Peasants Before a Portable Shrine in the British Museum, which was also a study for an etching, while of closer dimensions to the present sheet is a pen drawing of A Slovenian Soldier in the Museo Correr in Venice.

Provenance:
Private collection, Verona, in 1971Annamaria Edelstein, London, in 1989Artemis Fine Arts, London, in 2003 Purchased from them by Maida and George Abrams, Boston.

Caricature of a Man in a Tall Hat