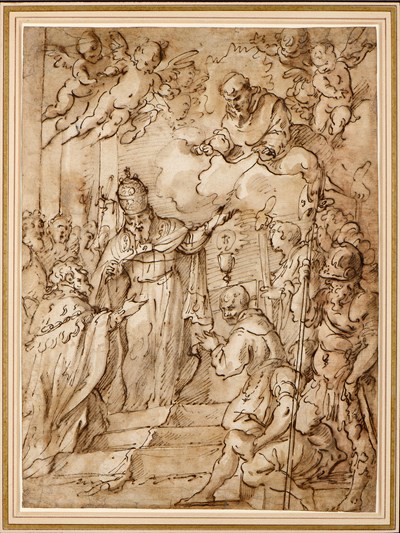 St. Francis Appearing to a Pope and King Sold


Drawn in the artist’s very distinctive pen manner, this drawing is a study, with several significant differences, for Monrealese’s painting of Saint Louis of France Receiving the Franciscan Girdle from Saint Francis, painted between 1635 and 1637, in the church of Santa Maria di Monte Oliveto (better known as the Badia Nuova) in Palermo. The altarpiece, which has undergone some repainting and has additions on three sides, differs from the drawing in several respects, particularly in the disposition of the figures. As such the present sheet must represent an early stage in the preparatory process. A variant or copy of this drawing is in the collection of the Galleria Regionale della Sicilia in Palermo. Monrealese had painted the same subject a few years earlier for another Franciscan church, San Francesco d’Assisi in Palermo. The fresco, destroyed in the Palermo earthquake of March 1823, is recorded in an engraving published two years earlier, in 1821. Some elements of the present sheet excluded from the Badia Nuova altarpiece, such as the soldier at the right, may be found in the composition of the lost fresco, which was, however, horizontal in format.

St. Francis Appearing to a Pope and King