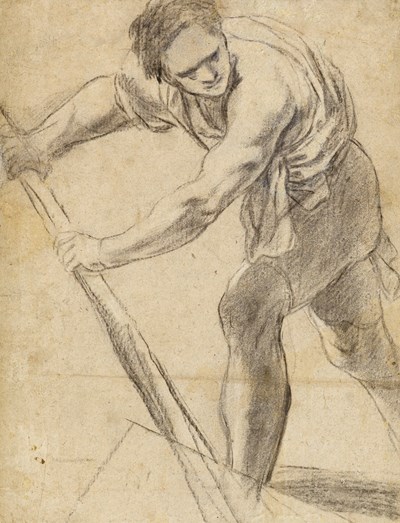 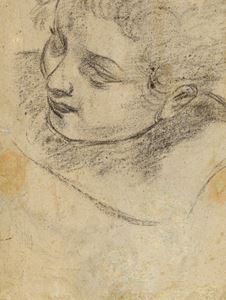 A Man Rowing [recto]; The Head of a Woman, Looking to the Left [verso]


This large and striking study of a male figure is a fine and typical example of Giacomo Cavedone’s bold draughtsmanship. The artist would have been exposed to the practice of making such chalk studies from the posed model at the Carracci academy. Although his biographer Cesare Malvasia notes that Cavedone made a careful study of the works of Annibale Carracci, it is the influence of Ludovico Carracci that is much more evident in the artist’s mature work. Several of Cavedone’s drawings are, in fact, directly inspired by figures in Ludovico’s paintings, and the recto of the present sheet is one such example. This drawing finds its direct source in the boatman in Ludovico Carracci’s painting of The Return from the Flight into Egypt, in a private collection in Bologna, which is generally dated to around 1598-1600. Although at this date the young Cavedone was just embarking on his career as an independent artist, the present sheet is - as Laura Giles has pointed out – a much later work by the artist, who is unlikely to have produced such a forceful drawing as early as 1598. Nevertheless, Cavedone remained closely associated with Ludovico’s studio until the master’s death in 1619, and a number of later drawings by him attest to the continued inspiration of the elder artist. It may be, therefore, that Cavedone drew the recto of this sheet a decade or more after Ludovico’s painting was completed. Alternatively, it may be posited that The Return from the Flight into Egypt is in fact later in date than 1600; indeed, the painting has been dated by Sir Denis Mahon to after 1610 and to c.1612 by Sydney Freedberg, who also related the painting stylistically to Ludovico’s 1612 canvas of The Body of Saint Sebastian Thrown into the Cloaca Maxima in the J. Paul Getty Museum. If Ludovico’s painting of The Return from the Flight into Egypt is in fact a work of c.1610-1612, it may be further supposed that, as one of his chief collaborators at this point, Cavedone could have been tasked by Ludovico with developing the pose of the boatman in the painting; it is interesting to note that there is no known drawing by Ludovico Carracci for any part of the composition.As Laura Giles has noted of such figure studies as this by Cavedone, in comparison with drawings of male nudes by Ludovico Carracci, ‘if more rugged and even clumsy by comparison, Cavedone’s stolid nudes are both more convincing as representations of brute force and more consistently abstract (and austerely so) in character.’ A stylistically comparable drawing of a muscular male figure by Cavedone is in the Uffizi in Florence and another is in the collection of the Nationalmuseum in Stockholm; the latter is a study for an altarpiece of The Temptation of San Anthony, datable to c.1607, in the church of San Benedetto in Bologna.The head on the verso of this drawing is a study, as Giles has pointed out, for the woman holding a candle, with her face half in shadow, in Cavedone’s painting of The Denial of Saint Peter in the Museo Davia Bargellini in Bologna. The painting, whose earlier provenance remains unknown, has been variously dated to between 1616 and 1618 (by Giles and Renato Roli) and c.1625-1626 (by Emilio Negro and Nicosetta Roio). Giles further suggests that the composition of the picture may have been inspired by a lost painting of the subject by Ludovico Carracci recorded by Malvasia, but of which no record of its appearance survives.

A Man Rowing [recto]; The Head of a Woman, Looking to the Left [verso]