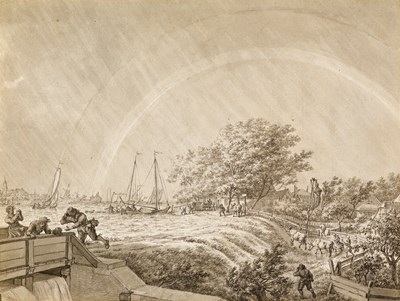 Autumn Landscape with a Rainbow (Autumn, Afternoon and Water) Sold


The present sheet is a preparatory study for a large finished watercolour by Cats, of similar dimensions, which is today in the Rijksmuseum in Amsterdam. The Rijksmuseum watercolour is signed, dated and inscribed in the same way as the present sheet, and also bears the inscription ‘September, October, November’.The Rijksmuseum drawing is one of a series of four superb watercolours depicting the seasons, and also showing the four quarters of the day and the four elements, which were commissioned from the artist for 600 guilders by the collector Jan de Groot in 1797. Not long after Cats' death, this series of drawings was already acknowledged to be his masterpiece as a draughtsman. After De Groot’s death the series of four watercolours was acquired at auction in 1804 by the art dealer Christiaan Josi for 1,000 guilders, and eventually entered the collection of the Rijksmuseum in 1992. The present sheet, as the artist’s inscription on the verso confirms, depicts Autumn, Afternoon and Water. The number 726 on the verso of the sheet is part of a numbering system used by Cats to keep his working drawings in order. Drawings bearing the numbers 714 and 728 are in the collection of the Amsterdam Historisch Museum in Amsterdam.

Provenance:
W. H. Staring, Kasteel Crabbehoff, Dordrecht, in 1931 (according to an inscription on the verso).

Autumn Landscape with a Rainbow (Autumn, Afternoon and Water)