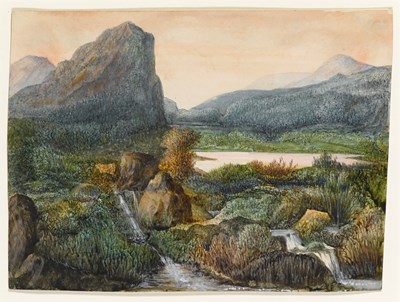 Mountainous Landscape with a Lake and Waterfalls Sold


Towards the very end of her life - it is first mentioned, as an amusement, in a letter of February 1874 – George Sand began producing watercolour drawings, using a distinctive technique, which she called ‘dendrites’, comparing them with the appearance of fossilized plants. These drawings were produced by applying pigment (often green) to a sheet of thick Bristol paper and, while it was still wet, pressing another sheet of paper on top of it. The random shapes created by this method of mixing pigments would then be worked on by the artist with watercolours, creating imaginary landscapes. Sand also sometimes referred to the technique as 'aquarelle à l'écrasage' (‘crushed watercolour’) and, as she described these works, ‘This crushing produced ridges which are sometimes curious. Assisting my imagination, I see woods, forests or lakes, and I accentuate the vague shapes produced by chance.’A number of these ‘dendrite’ watercolours by Sand are today in the Louvre and others are in the collections of the Musée de la Vie Romantique in Paris and Sand’s home at the Château de Nohant, as well as in several private collections.

Mountainous Landscape with a Lake and Waterfalls