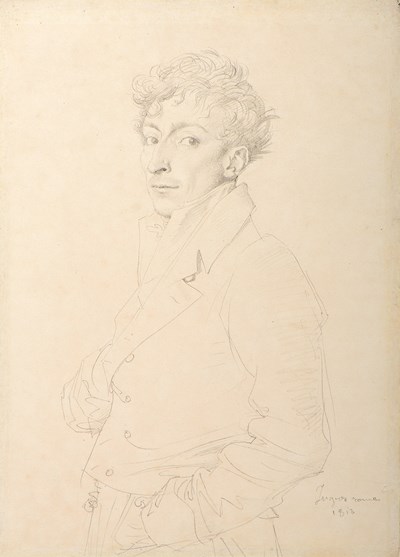 
Around 460 portrait drawings by Ingres are known today, most of which date from before 1824, when he left Italy and returned to Paris. His Roman portrait drawings can be divided into two distinct groups; commissioned, highly finished works for sale, and more casual studies of colleagues and fellow artists, which were usually presented as a gift to the sitter. He had a remarkable ability of vividly capturing, with a few strokes of a sharpened graphite pencil applied to smooth white or cream paper, the character and personality of a sitter. (Indeed, it has been noted that it is often possible to tell which of his portrait subjects the artist found particularly sympathetic or appealing.)For his drawn portraits, Ingres made use of specially prepared tablets made up of several sheets of paper wrapped around a cardboard centre, over which was stretched a sheet of fine white English paper. The smooth white paper on which he drew was therefore cushioned by the layers beneath, and, made taut by being stretched over the cardboard tablet, provided a resilient surface for the artist’s finely-executed pencil work.A splendid example of Ingres’s informal portraiture, the present sheet was given by the artist to the sitter. It remained completely unknown until its appearance in the 1913 exhibition David et ses élèves in Paris, where it was lent from the collection of the diplomat Comte Alfred-Louis Lebeuf de Montgermont (1841-1918) and identified as a portrait of ‘M. Gaspard Bonnet, directeur des Domaines’. The drawing reappeared six years later, at the posthumous auction of Lebeuf de Montgermont’s collection in 1919, when it was acquired by the painter Bernard Wolff for a private collector, but was not seen in public again for over seventy years.In his magisterial catalogue of Ingres’ portrait drawings, Hans Naef, who only knew this drawing from the illustration in the 1919 Lebeuf de Montgermont auction catalogue, commented on the spontaneity of execution and the unique physiognomy of the subject. Although of illegitimate birth, Gaspard Bonnet (1779-1854) had a successful career as a civil servant for more than forty years. At the time that Ingres drew this portrait, Bonnet was serving in Rome as a Vérificateur de l’Enregistrement et des Domaines, or inspector for French Imperial buildings. Ingres must have met him at the same time as he produced drawn or painted portraits of other French officials of the Napoleonic Administration de l’Enregistrement et des Domaines in Rome - including Edme-François-Jean Bochet, Charles-Joseph-Laurent Cordier and the Director of the Department, Hippolyte-François Devillers - between 1811 and 1812. Bonnet left Rome in November 1814, following the downfall of Napoleon, and was transferred to a post in Grasse in the south of France. Over then next thirty years he continued to work for the Administration de l’Enregistrement et des Domaines in various cities throughout France, including Lyon, Toulon, Perpignan and, between 1838 and 1843, Ingres’ hometown of Montauban. Awarded the Legion d’Honneur in 1844, Bonnet died shortly before his 75th birthday, probably at Nîmes.Two years after the present sheet was drawn, Gaspard Bonnet may have sat to another French artist in Rome. He is thought to be the subject of a portrait drawing by Michel-Martin Drolling (1786-1851), dated 1814, which is today in a private collection in New York; a suggestion based on the similarities of facial features, hairstyle and dress in both drawings.