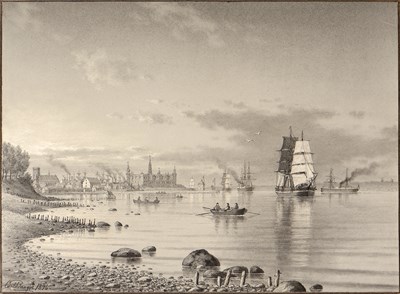 View of the Øresund with Kronborg Castle Sold

Pencil and scratching out, with touches of white heightening. Framing lines in pencil. Signed and dated Carl Baagoe 1896 at the lower left.185 x 252 mm. (7 1/4 x 9 7/8 in.)ACQUIRED BY THE NATIONAL GALLERY OF ART, WASHINGTON, DC.


This view of the Øresund, the sound between Sweden and Denmark, shows, at the left, Kronborg Castle in the Danish town of Helsingør. Immortalized as Elsinore in Shakespeare’s Hamlet, Kronborg Castle stands at the extreme tip of the island of Zealand, at the narrowest point of the Øresund. Baagøe painted several views of shipping in the Øresund, many with Kronborg Castle in the distance.Writing in 1874, the archaeologist and antiquary Revd. Charles Boutell singled out for praise a group of marine paintings by Baagøe that were exhibited at the Royal Danish Galleries in London that year. As he wrote, ‘Once more I have before me a group of sea-pictures which, in their turn, justly claim from me a decided expression of admiring commendation. Carl Baagøe is the painter, and he paints sea and shipping. The sea he paints well, the shipping he paints to perfection...[A] picture by the same artist, painted upon a large canvas, is specially remarkable for displaying an accurate and exact knowledge of even the minutest details of a ship and of her spars, rigging, and sails; so perfect, indeed, is this knowledge, and of so evidently practical a character, that Baagøe may be styled, in the best sense of the title, a portrait-painter of shipping; his vessels, however, establish beyond all controversy the fact, that he has painted from the veritable ships themselves, and not from even the most elaborate models of them. In the very clever and telling picture under consideration, the sea, of which a broad expanse is shown, has its smooth surface slightly rippled by a faint breeze, the sky being bright and serene. In this scene, two men-of-war appear, a frigate and a line-of-battle ship...It is not often that such perfect ship-portraits take parts in so truly excellent a marine picture. The same remark is equally applicable to another large and important work, in which Baagøe has shown the sea responding to the action of a strong wind, while drifting rain-clouds sweep heavily over the horizon...This is a picture to charm a seaman, and a landsman also, if he has any of the real "salt" in his composition...Carl Baagøe also has the following excellent pictures: — The Open Sea, the waves sparkling under a stiff breeze,...the Entrance to the Sound, off Elsinore, with shipping and a light-vessel — an animated and most effective composition, thoroughly well painted...and a small view of a perfectly calm sea, with a brig, a fishing-boat, and other vessels, off Kronborg Castle.’ Among comparable, highly finished drawings by Carl Baagøe is a view of Shipping on the Øresund off the Coast of Denmark, signed and dated 1865, and A Steamer and other Sailing Vessels Passing through the Øresund near the Island of Hven, dated 1886; both drawings appeared at auction in London in 1980.

View of the Øresund with Kronborg Castle