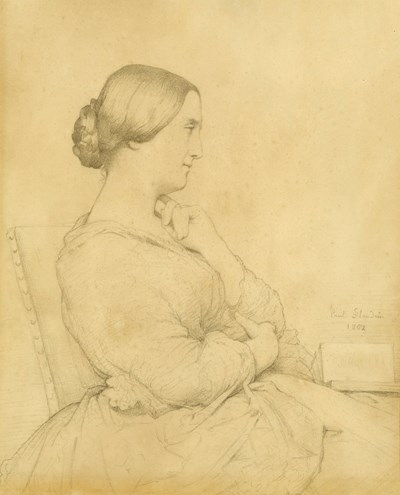 A Seated Woman with a Book Sold


Although best known today for his landscapes, Paul Flandrin was also greatly admired in his day as a portrait painter, and many of his commissioned portrait paintings were exhibited at the annual Salons. He also produced a great number of portrait drawings in lead pencil, in which the inspiration of his master Ingres is particularly evident. Flandrin’s pencil portraits, greatly admired by his contemporaries, provide a fascinating glimpse of the society of the Second Empire and the Third Republic. His subjects included eminent figures, aristocrats, statesmen and members of elegant Parisian society, as well as members of his family and, perhaps most notably, fellow artists, including other graduates of the studio of Ingres and pensionnaires at the Académie de France in Rome. Apparently, he would also often produce portrait drawings of the same sitters that his brother Hippolyte was painting. Drawn in 1862, the present sheet, a portrait of an unknown woman seemingly distracted from her reading, is typical of Flandrin’s delicately executed drawings, which reflect the inspiration of Ingres’ own drawn portraits. As in all of the artist’s drawings, a particular emphasis is placed on the sitter’s pose and on the precise rendering of her costume and coiffure. Also in keeping with a number of other portrait drawings by the artist, Flandrin has here chosen to depict his subject in strict profile, seated in a chair; a pose which imparts a certain familiarity between the artist and the sitter.

A Seated Woman with a Book