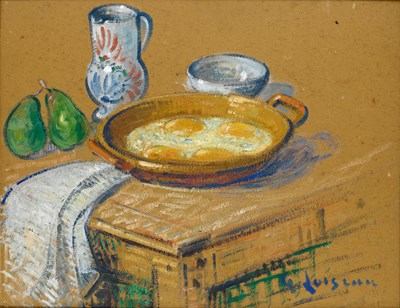 Still Life with a Dish of Fried Eggs Sold


Gustave Loiseau produced several paintings of still-life compositions, particularly in the 1920’s and later. Often painted on board, many of these works were done at Pont-Aven between 1922 and 1928. As Didier Imbert has noted of the painter’s method and technique, ‘essentially impressionist in his depiction of landscapes or street scenes, it acquires for the still-lifes a certain classical resonance, a staid geometric composition, almost synthetic, in which one perceives his preoccupation with immobility, lack of movement, the static quality of the object represented.’ The present work may be dated to around 1923. The ceramic dish in which the eggs are placed is found in a number of paintings by Loiseau, such as a Still Life with Fried Eggs and a Napkin of 1922, or a Still Life with a Lobster, Eggs and Lemon of 1931. The same dish also appears in a Still Life with Eggs and Oysters which appeared at auction in London in 1994. A photo-certificate from Didier Imbert, dated the 6th of February 2007, accompanies the present work.

Literature:
To be included in the forthcoming catalogue raisonné of the work of Gustave Loiseau by Didier Imbert.

Still Life with a Dish of Fried Eggs