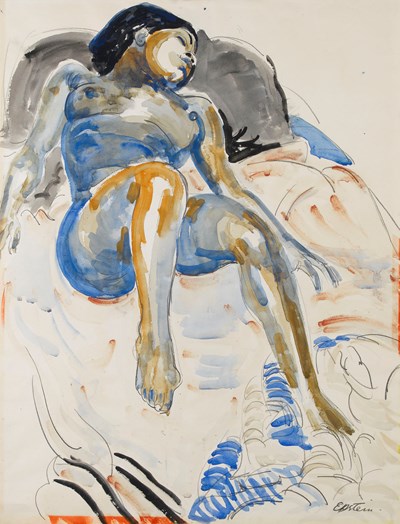 
The subject of this drawing is a Kashmiri Indian woman named Amina Peerbhoy, who was to become one of Epstein’s favourite models. Epstein met her at the British Empire Exhibition at Wembley in 1924, and soon gave her the nickname Sunita. As Epstein’s wife Kathleen later recalled, ‘Epstein was always interested in exhibitions where colourful people from other countries displayed themselves and their wares…he visited the Wembley World Fair and found there the beautiful Indian Sunita in charge of a stall with her younger sister and small son. These three posed for the sculptor over a period of years. Sunita could be equally a Madonna (she and her son posed for the Madonna and Child, 1926, now in a New York church) or the odalisque of many drawings – alone, with her sister, or with her boy...’ (Lady Epstein and Richard Buckle, Epstein Drawings, London, 1962, p.21, under no.57). Sunita, together with her son Enver and her sister Miriam Patel, lived with the Epsteins in Holborn between 1925 and 1931. She posed, often alone but sometimes with her son, for numerous drawings and sculptures by Epstein during this period, and was also employed as a model by Matthew Smith.