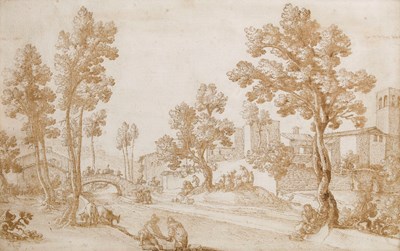 A Tuscan Landscape with Figures by a River Sold


This large, finished landscape drawing is a typical example of the work for which Remigio Cantagallina is best known, and for which he was praised by Baldinucci. Almost certainly intended as an autonomous work of art, it is likely to have come from an album of over a hundred landscape drawings, formerly in the collection of the scholar and antiquary Dr. Henry Wellesley (1791-1866), nephew of the Duke of Wellington, that appeared at auction in London in 1954. Although inscribed ‘Vedute di Toscana d’Jacopo Ligozzi’, the album was in fact largely made up of highly finished drawings by Cantagallina of various dates, several of which were signed. The album was acquired by the dealer Hans Calmann and the drawings were dispersed over the next several years; examples are today in the Fondation Custodia (Frits Lugt Collection) in Paris, the Ashmolean Museum in Oxford, the Pierpont Morgan Library in New York, the Princeton University Art Museum, the Detroit Institute of Arts, the National Gallery of Art in Washington, D.C., and elsewhere.

A Tuscan Landscape with Figures by a River