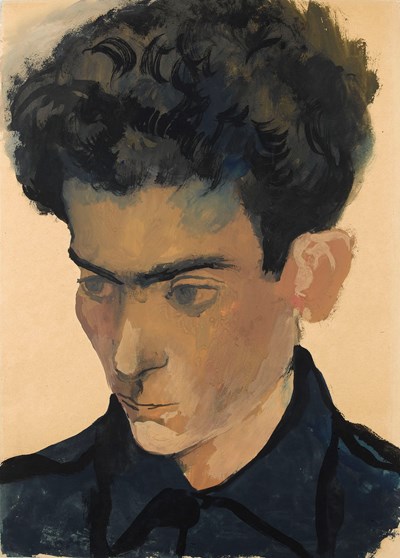 Portrait of a Young Man Sold


The present sheet may be dated to around 1927, while Tchelitchev was living and working in Paris. The 1920’s were a period of intense interest in portraiture on the part of the young artist, and it was during this period that, as one early scholar has noted, ‘the human face began to fascinate him above all other subjects. In late 1924 and 1925 he finished several self-portraits and a number of portraits of friends with whom his psychological and emotional accord was intimate and continuous…In [these portraits] are the unmistakable signs of the expressionist tradition of portraiture which had been developing in Europe since the turn of the century…But within the hard, arbitrary contours of Tchelitchew’s portraits there is an implication of tender brooding and reverie which the portraiture of his elders for the most part lacked. By comparison with the latter, Tchelitchew’s portraits are romantic or, as the term came to be, Neo-Romantic.’This drawing – which remained with Tchelitchev until his death – would appear to depict the American pianist Allen Tanner (1898-1987), a friend and companion of the painter during his years in Berlin and Paris. As Tchelitchev’s posthumous biographer has noted of Tanner, ‘An aspiring pianist in those old days, he had been a gilded willowy youth with a shock of black hair, a soft, half-hidden, languishing glance, a handsome face and the primmest lips and largest romantic ideas in the world.’ Tanner was first introduced to Tchelitchev in Berlin in December 1922, and the two soon became lovers, sharing an apartment and moving to Paris together in 1923. The relationship continued until 1933, when Tchelitchev began a liaison with another American, the writer and poet Charles Henri Ford.

Portrait of a Young Man