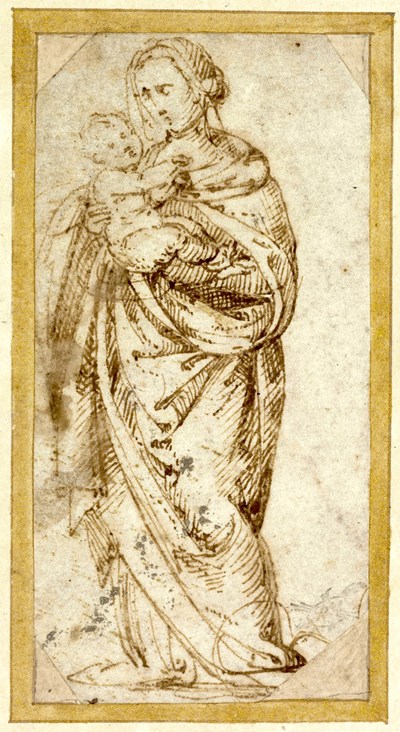 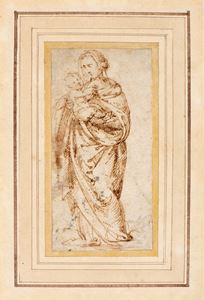 The Virgin and Child Sold


Despite the artist’s lengthy and active career, drawings by Ridolfo Ghirlandaio are rare, and only a handful of drawings have been firmly attributed to him. While determining a firm chronology for Ghirlandaio’s style as a draughtsman is problematic, the present sheet would appear to be an early work by the artist, datable to the first decade of the 16th century. With fine penwork applied with regular hatching and crosshatching, this small drawing is typical of the artist’s draughtsmanship, which ultimately derives from the example of the drawings of his father Domenico Ghirlandaio.The present sheet also displays the particular influence on the younger Ghirlandaio of the pen drawings of Fra Bartolommeo, to whom it was once attributed. Indeed, the drawing is derived from a pen and ink study of the Virgin and Child by Fra Bartolommeo in the Kupferstichkabinett in Berlin, which in turn was used for the figure of the Virgin in two early paintings by the Frate; an Annunciation of 1497 in the Cathedral at Volterra, and a Holy Family, painted at around the same time, in the Los Angeles County Museum of Art.A stylistically comparable pen drawing by Ridolfo Ghirlandaio of A Bishop and a Priest, with the same Richardson and later provenance as the present sheet, is in the collection of Wheaton College in Norton, Massachusetts. It has been suggested that both drawings may have been trimmed from the same sheet. Among other comparable pen drawings by Ridolfo Ghirlandaio is a study of The Virgin and Child with Saints Onofrius and Augustine in the Szépmüvészeti Múzeum in Budapest and a Saint Sebastian formerly in the Habich collection in Kassel.

The Virgin and Child